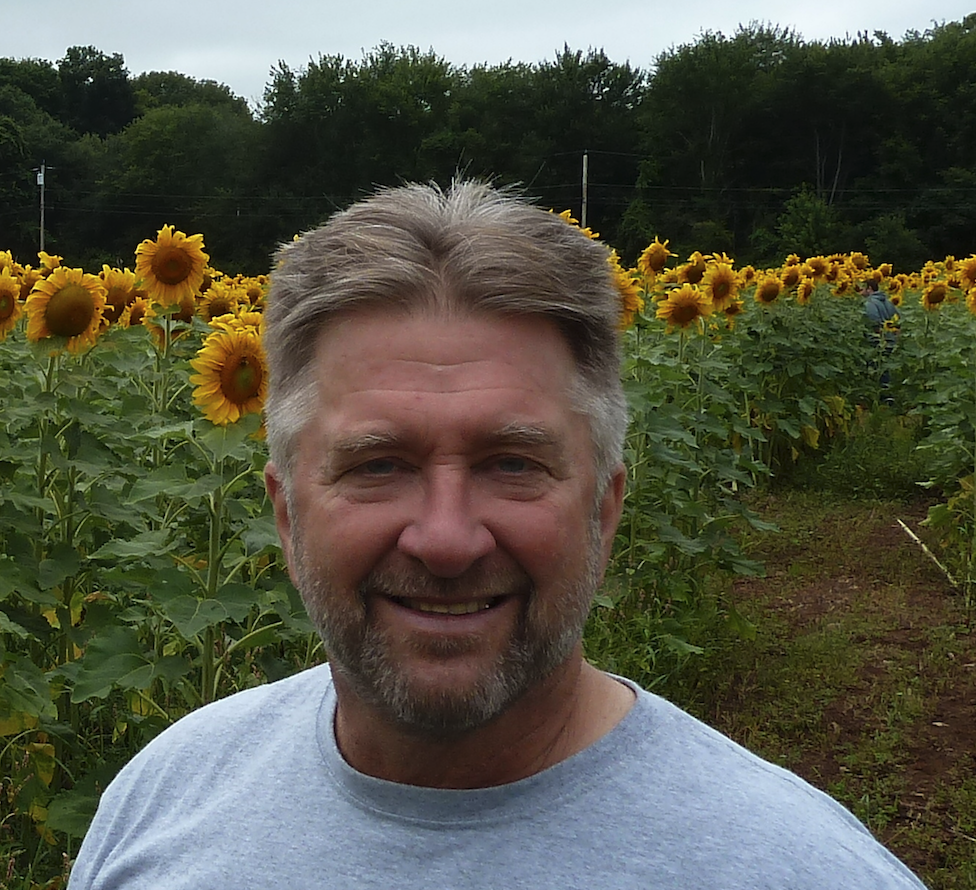 We always talk in the course of a year, about how the weather seems one way or another, how it’s different from normal. I think it also gets to the point over time, of not really knowing what normal is. I can remember unusually warm spells and cold spells from when I was a kid. I think what may color my responses somewhat is that Guilford is a shoreline community. Our orchards, many of our orchards, are within a few miles of the coast. So we get a very moderating influence from Long Island Sound.

Effective adaptation to changing market conditions has been a hallmark of Bishop’s Orchards, a 140-year-old farm located near Guilford, Connecticut. Through six generations, the Bishop farm has evolved from a small general farm peddling ice, milk, fruits and vegetables door to door in the local community, to a wholesale grower of fruits and vegetables supplying regional markets, to a thriving retail market offering a diverse line of fresh and processed products, many produced on the farm.

Jonathan and Keith Bishop are cousins, fifth-generation co-owners and managers of Bishop’s Orchards and related businesses. Jonathan is responsible for production, harvesting and warehousing of all crops on the farm, including disease and insect control, integrated pest management (IPM) and the management of farm equipment. Keith is responsible for retail marketing, sales and management of the family business, and is also Bishop’s winemaker.

While apples are a focus of production on the 320-acre farm, Jonathan also manages a diverse mix of vegetable, berry and flower crops for direct sales through an on-farm, full-service retail market and bakery, a winery, a pick-your-own operation and a CSA. Bishop’s was an early innovator of IPM methods for fruit production in Connecticut. Jonathan has reduced the use of pesticides on the farm by up to eighty percent through a program featuring scouting, fumigant cover crops, trap crops, agroforestry and other practices that serve to increase biodiversity and reduce pest pressures. The farm and associated packing/cider operation at Bishop’s Orchards employs a full-time staff of fifteen and adds as many as thirty seasonal employees during the growing season, while the retail side of the business employs about fifty-five people year-round with an additional sixty seasonal staff.

When Jonathan thinks back over the thirty-five years he has been managing production at Bishop’s Orchards, several long-term production challenges come to mind. Changes in pesticides, novel pests, insects and disease management and wildlife — particularly deer and voles — have been continually challenging. “Most of the complication on the insect and disease side,” Jonathan explains, “is changing chemistries, the phasing out of the organophosphates and some of the longer residual fungicides, the pest-specific nature of the replacements, and some introduced species.

The spotted wing drosophila [fruit fly] has become a huge pest for small fruit growers and the brown marmorated stink bug is another one that, knock on wood, we haven’t had to deal with yet. It’s another one that’s out there. These recent pest introductions have happened, I think, as a result of global trade, the nature of trade these days. We’ve maybe let down the guard a little bit over the years and the focus has shifted towards trying to find terrorists and bombers and not concentrating so much on some of these other imports that can have major impacts on agriculture.”

Weather is always a challenge in fruit and vegetable production and that has also been true at Bishop’s. Like many fruit growers, Jonathan has continuing challenges with variable spring weather, summer drought and periods of moisture that encourage plant diseases. He thinks that dry periods might be the biggest challenge because of all the extra work involved in watering. “On a lot of our small fruit crops, we have trickle irrigation in place,” he says. “With the tree fruits and some of the vegetable crops, you get involved in moving pipe around and getting water to the pipes. The dry periods are difficult to deal with in that regard.”

Jonathan can’t say that he has seen any kind of changing trends in weather. There have always been extreme events through the years and he doesn’t think these have increased in frequency or intensity during his lifetime. He can recall some extreme weather events throughout the years. “For instance, we just went through a pretty cold spell with the Polar vortex [in 2014]. Yet I can remember in 1981 we lost our peaches from three days of minus 12 temperatures. We haven’t had that kind of cold since then. We had a really warm February in 1976, the apple buds actually started to swell, and then it dropped back to normal winter temperatures, and some varieties were 100-percent loss that year. The earliest season I can ever remember was in 2012. We started five weeks earlier than normal, but it was followed by last year [2013], which was a fairly late season for us. Of course, there was the Halloween snowstorm in 2010. It’s hard to say that there is a trend even in the variations because there’s been some pretty big swings going back thirty-some years. Like I said, I’ve seen extremes but I haven’t seen an increase in the extremes.”

Jonathan thinks that the farm’s location on the coast of Long Island Sound may have provided some buffer against weather extremes. “The sound may be moderating the absolute cold temperatures in the winter and the hot temperatures in summer. Growers inland often face much bigger issues with spring cold temperatures or frost than we do. That maybe part of why our experience may be a little different from what other people might have noticed.” Over the years, Jonathan has learned to be prepared for whatever the weather might bring. “Every season we plan for the quote-unquote normal situation,” he says. “We’re prepared for reacting to unusual events. If we had an unusually heavy rain and we needed to reapply a protectant to a crop or something, we just figure out what we’re going to need to do in terms of having the systems ready to go when we need them. I guess we just try to be prepared for anything.”

Although the last thirty years have brought a lot of changes to Bishop’s, most have been driven by marketing considerations, not changes in weather, Jonathan explains. “There are so many factors other than weather that are driving crop choices. We’ve been moving very steadily away from apples, which used to be our biggest crop by far. Apples tied us to wholesaling. Since then, over time we’ve been using alternative marketing methods that are pick-your-own, through our own retail or the CSA. We have been trying to adjust our mix of crops to match our production to our retail needs. We have been expanding into other crops like peaches, small fruits and a number of vegetable crops. If one thing doesn’t work out one year, it’s better the next. We’ve always looked at our diversity as our insurance.”

Jonathan appreciates the benefits to risk management provided by diversity, even within just one crop. “It’s always interesting — even within a single crop like apples, there will be a year when one particular variety is just outstanding and the quality of another one is just not what you’d hope it would be. We’re always looking at our diversification and adding different things to the mix, trying them out, sort of move it around and doing a little bit of our own research and development in-house to find stuff that hits a niche that we want to try to hit.”

A number of severe storm events over the last few years confirmed the benefits of scale, experience and crop diversity. Jonathan explains, “Because we’re a fairly good size farm for our area and we’re pretty diversified, when we do get a bad weather condition, something that might drive another farmer to have a bad crop, typically has less of an effect on us.” One example is with the CSA. “There are quite a few CSA’s starting up in our area. There’s a small farm not too far from us who suffered pretty badly a year or two ago. And that’s okay, their CSA members understood that it was a bad year. But the following year when they’re looking to be in a CSA, and they have a choice between a CSA that’s supplied people with something all season long or a CSA that basically gave up in July… We have a lot of people that have previously been with somebody else who signed up with us because we have more capacity to make sure people get their value. It’s a scenario where both the scale and the diversification mattered.”

Jonathan is upbeat about the future of Bishop’s Orchards. He believes that the diversity of their crop production and marketing practices will help the business remain successful even if weather becomes a more important risk factor as climate change intensifies through mid-century.

Jonathan Bishop has been active in local and state civic and agricultural organizations for many years. He has served as a member of the USDA Farm Service Agency State Committee and is currently on the board of New Haven Farms, a nonprofit organization that promotes health and community development through urban agriculture in New Haven, CT. In 2001, Bishop’s Orchards was named the Mass Mutual National Family Business of the Year. Bishop’s Orchards was one of sixty American farms and ranches selected for the USDA-SARE publication The New American Farmer: Profiles of Agricultural Innovation.