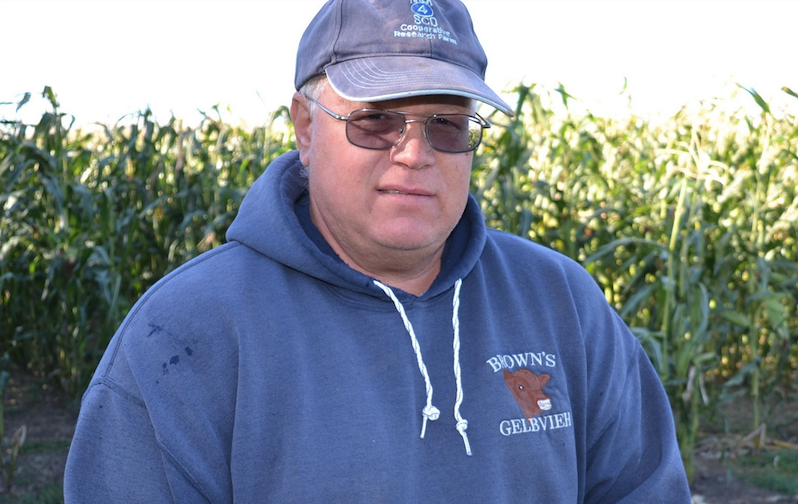 There is so much variability now that you really can’t plan on anything. It seems that every year is an extreme. Really, I can’t honestly say there is anything that we really plan on as far as the weather anymore. There is definitely more variability and precipitation from year and more variability in temperature.

Dirt to Soil: Proving the Power of Regenerative Agriculture

Gabe Brown has been producing cattle, feed and food grains near Bismarck, North Dakota, for more than thirty years. When he began farming on the ranch, natural resource quality was poor. The cropland had been intensively tilled for many years, soils were very low in organic matter, and light rains of as little as a half inch an hour caused surface runoff and soil erosion. Weeds, insects, low soil moisture and poor fertility all seemed to be holding down crop yields and the ranch’s extensive native grasslands were in poor health too.

After he and his wife Shelly purchased the ranch from her parents in 1991, Gabe knew that he wanted to make some changes. He began transitioning the ranch to no-till, to diversify crop rotations and to management-intensive grazing in order to build soil quality. In 1993, Gabe converted all of his cropland to no-till and the following year he added peas, a legume crop, to the spring wheat, oats and barley that had been grown for many years on the ranch. Encouraged by the improvements he saw in soil quality in those first two years, Gabe planned to continue making changes to build soil quality and biodiversity on the ranch, but extreme weather caused near total crop losses at Brown Ranch for the next four years in a row.

“Back in the mid ’90s,” Gabe recalls, “I went through three years of hail and one year of drought. After you lose your crops four years in a row, the banker is not going to loan you money.” Short on operating funds, he didn’t have much of a choice except to continue working to improve resource quality on the ranch. He didn’t have the money to purchase fertilizers or pesticides for the croplands. “Since that time I’ve really focused on the soil resource and on improving the water cycle, energy cycle and nutrient cycle using holistic management practices,” Gabe explains. “It has been a journey, one long learning process.”

Today, the Brown Ranch includes about 2,000 acres of native rangeland that has never been tilled, 1,000 acres of perennial introduced forages and 2,000 acres of no-till, dryland cropland producing corn, peas (grain and forage types), spring wheat, oats, barley, sunflowers, vetch, triticale, rye and alfalfa, plus a great diversity of cover crops. Throughout the year, as many as seventy different species are planted in various fields. The grains, sunflower seeds, peas and alfalfa are sold for cash while cattle, poultry and sheep are rotationally grazed through the grasslands, cover crops and forages. No insecticides or fungicides have been used on the ranch for over a decade, herbicide use has been cut by over 75 percent and no synthetic fertilizer has been used since 2008. Corn yields average 20 percent higher than the county average.

Water management is no longer a big issue at Brown Ranch, where Gabe has seen first-hand the benefits of soil quality for reducing weather-related risks to production. “After no-till for twenty-plus years, very diverse crop rotations, cover crops, plus livestock integration, we’ve improved the health of our soil to the point that the infiltration rate, the water-holding capacity and the nutrient cycle are totally different now. Our average annual precipitation is about sixteen inches. Before, when we were only infiltrating a half of an inch per hour, we got very little of that water into the soil profile. We were always fighting a lack of moisture, whereas now, virtually every raindrop that falls we’re able to hold.” Over the twenty years that Gabe, his wife Shelly and their son Paul have worked to transition the ranch to a more sustainable production system, soil organic matter levels in the croplands have more than tripled and the soil infiltration rate has increased from one half inch to eight inches per hour.

Gabe really noticed weather extremes getting more frequent starting somewhere around 2006 or 2007. Flooding in parts of North Dakota seems to have become the norm rather than a rare event and more variable weather has complicated fieldwork and made crop production more difficult. “It used to be we knew we had a window of time when it’s usually dry and we can harvest some forages or plant a crop,” says Gabe. “We could plan for harvest during that dry period and plant crops according to a plan. That’s no longer the case.”

Gabe says the most effective climate-risk management tool he has is the capacity of the ranch’s healthy soils to buffer more variable rainfall and temperatures. “If you can improve your soil resource and make these soils more resilient,” says Gabe, “you’ll be able to weather these extremes in moisture and temperature much more easily. I can easily go through a two-year drought and it does not affect our operation to any great extent because the soil is so much more resilient. Now you’re still going to have some swings in yields with annual precipitation, but it does not affect crop yields to the extent that it used to. If you have a healthy resilient soil resource and a functioning water cycle then your crops and livestock are not nearly as susceptible to these extremes.”

Gabe appreciates the flexibility his diverse crop rotation allows him in variable weather conditions. Because he plants throughout the year, he can make adjustments to fine-tune the crop rotation plan to current weather conditions. “That’s the beauty of the diverse system of ours,” Gabe explains. “At times, we want to plant the cover crop and then if the weather conditions change, maybe it’s dry, we’ll change the mix of that species a bit for more crop types that can handle drier conditions or vice versa. We have a really big toolbox to choose from.” This ability to switch out crops gives Gabe more ability to adapt his crop rotation to weather variability and extremes than other producers growing just a few crops, a point that has not been lost on the conventional producers that visit the Brown Ranch to see for themselves how Gabe’s farming system works. Gabe explains, “I tell people this when I speak in the Corn Belt. Those guys plant either corn or soybeans — that’s all they plant. If corn and beans don’t work out for those guys, then they’re going to have a poor year, whereas we have the ability to switch in or out of so many different crops. It just makes management so much easier.”

Gabe has also made changes to his livestock production to better fit it to the ranch’s natural environment and to improve natural resources on the farm. He uses management-intensive grazing techniques and grazes his cattle on native prairie, improved pastures, and annual cover crops. Gabe explains, “The way we manage our livestock operations, there are very few weather-related events that will affect our animals. We used to calve in February and March, so shelter, animal health and feeding during the cold were all a problem. Now, we calve in late May and June out on grass and that is a healthy environment for them. Due to our selection process the cattle are now more adapted our environment. We raise cattle in a much more natural way now. The environmental extremes do not affect our livestock as much anymore.”

For more than a decade, Gabe has been a popular speaker at farming conferences throughout the country. He also hosts thousands of visitors to the ranch each year and is proud to say that he has hosted visitors from all fifty states and sixteen foreign countries over the years. As weather variability and extremes have increased, Gabe has noticed a groundswell of interest in his methods from farmers and ranchers with a more conventional mindset. “The weather is always brought up at every meeting, because they are seeing more extremes and more variability and they are asking, ‘How do I buffer that?’ Every place I go these days I am speaking to full rooms of people because they are realizing that the conventional agriculture model just isn’t working. They’ve been through a period here the last several years of very good commodity prices, but it’s rapidly changing and they realize they can’t keep going on the way they are.”

Gabe is also heartened by new connections being made between soil health and human well-being. “People are starting to see how the conventional production model is contributing to the human health crisis in this country. I think that a lot of this relates to the soil and how we’ve degraded it. This has led to the destruction of the water cycle, and that’s severely affecting society. People are seeing they have to change. That’s why soil health and regenerating our resources is so important.”

Gabe expressed concern about the barriers created by crop insurance in grain production. “The current program is antagonistic to healthy soils,” says Gabe. “Farmers are now making planting decisions based on crop insurance guarantees. This leads to lower diversity which negatively affects soils and it is terrible for the consumer. Ideally, I would like to see all federal subsidies for crop insurance eliminated. If this were done producers would quickly learn that the success of their operation depends on a healthy soil ecosystem. If we truly want to regenerate our soils, crop insurance subsidies should be eliminated.” Gabe believes that programs to reward good soil management would be an effective way to encourage changes in farm management practices, but he acknowledges that such programs could create a whole lot of bureaucracy too.

Asked about the future, Gabe is confident that the resilience he has cultivated on his ranch will serve him well as climate change intensifies. He is optimistic, too, about the increased interest in his production system. “No matter what the reason,” says Gabe, “weather, economics, or a little of both, there is growing interest among conventionally-minded grain producers in how soil health can increase production system resilience.”

Gabe Brown is nationally recognized for his innovative work in soil quality and integrated production systems. He is a popular speaker at farming conferences throughout the country and regularly hosts tours and workshops at the Brown Ranch. He has actively participated for many years in soil quality research on his ranch in collaboration with university and federal scientists. Brown’s Ranch won the National Cattlemen’s Beef Association’s Environmental Stewardship Award in 2006 and Gabe was named the USA Zero-Till Farmer of the Year in 2007. He is the recipient of the 2008 Honor Award from the Soil and Water Conservation Society. In 2012, Gabe was honored with the Food Producer’s Growing Green Award by the Natural Resources Defense Council. Gabe was a featured speaker at the 2014 National Cover Crop and Soil Health Conference, a landmark event that brought together three hundred agricultural leaders and innovators to explore how to enhance the sustainability of American agriculture through improved soil health.