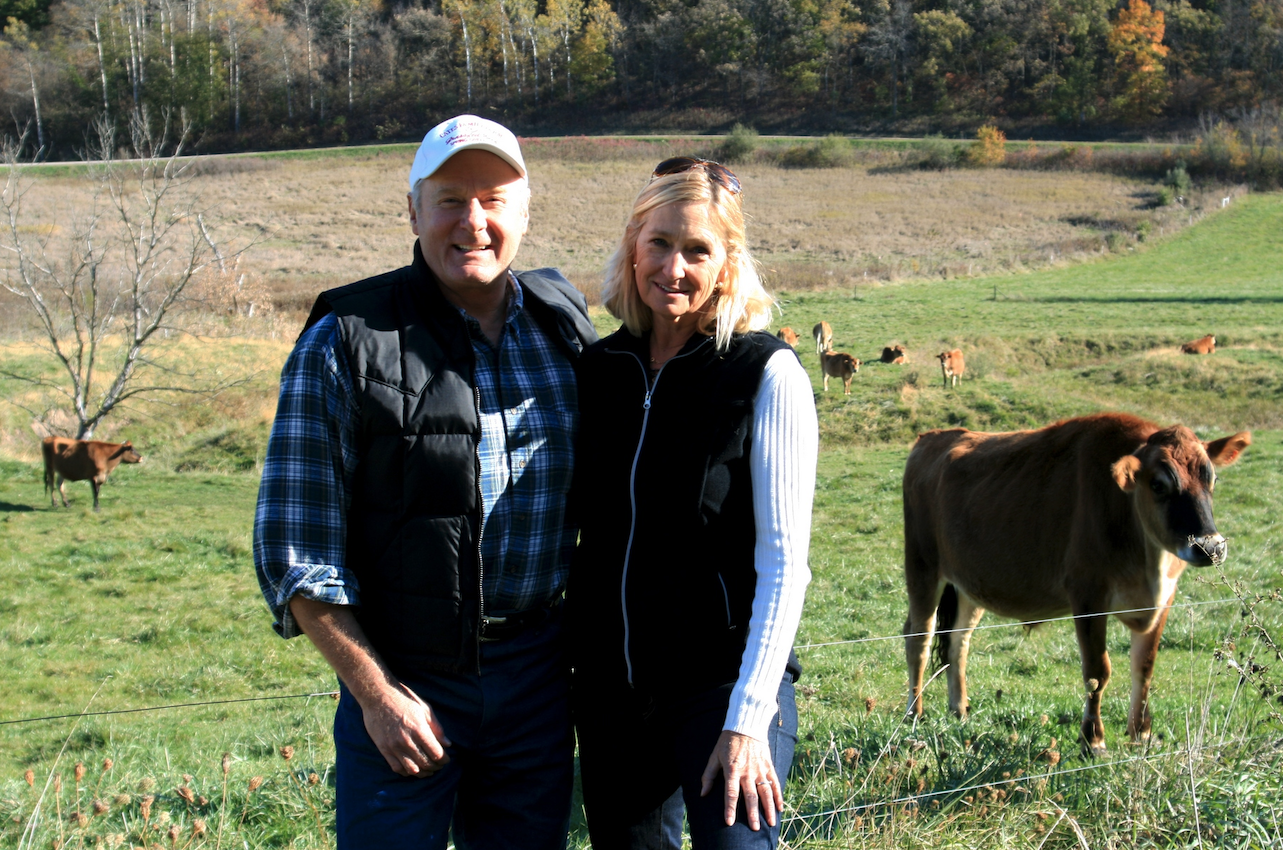 If the grass is getting shorter and it is not raining, the worst thing you can do is keep grazing. If you take the grass down too short in our part of the country, the soil will get hot and that grass will stop growing. You’ve got to get off it, so the ground doesn’t get hot. Last summer (2012) was the worst. I had to ship cattle off to pasture and I’ve never had to do that before.

Cates Family Farm Exemplifies Working With the Land, Not Against It

Dick and Kim Cates operate Cates Family Farm, a grass-fed beef farm near Spring Green in the Driftless Area of southern Wisconsin, about an hour northwest of Madison. The farm has produced pasture-based beef for more than a century and has been in the Cates family for over forty years. It includes 700 acres of managed grazing land and 200 acres of managed forest.

Dick learned the business of livestock production at the Cates farm, but left home after college to gain experience ranching in Montana and managing livestock overseas in Saudi Arabia. He returned home in 1987 and took over management of the farm’s beef cattle herd and with Kim’s help, made changes to improve farm profitability including adopting rotational grazing practices, restoring a native oak savannah on their land, and using intensive grazing to restore a trout stream that runs through the farm. Since 1990, the Cates have raised stocker cattle to maturity on their farm. The grazing season usually runs from early April to the end of November. The rest of the year the cattle that are overwintered on the farm are fed hay purchased locally. The Cates direct market their pasture-raised steers as “grass-finished” to grocery stores, restaurants, cafeterias and households around southern Wisconsin and in the Chicago area.

More variability and extremes in weather over the last ten to fifteen years have created some new management challenges at Cates Family Farm. “In my mind, we have had more high temperatures, more dry periods, more excessive rain, wet periods, so yes, more fluctuations,” explains Dick. “Moisture extremes and temperature extremes, I mean big winter extremes, minus twenty, minus thirty. More snow in the winter. Back when I was a boy we had quite a bit of snow in the winter, but then there were a lot of decades after that we didn’t have very much.”

Dick has noticed a change in weather variability since about 2000. “Well, there seems to be more frequent and longer dry periods as well as more floods,” he says. “We have a trout stream running through the property and occasionally it floods. Back in 2000, we had excessive rain that caused flooding. And then we had the excessive rains that caused the flooding in 2007 and 2008. Fortunately we haven’t had another big flood since then, but we’ve had more droughts. I have kept rainfall data on my farm since 1987. I’ve seen more intense rainfall events and then longer dry periods. And along with those dry periods, it has been really hot. In 2004 there was record high heat here.”

More snow in winter, plus rising hay prices, have sharply increased overwintering costs. Dick explains, “It is getting more difficult in the winter, because hay is more expensive than it was and we have more snow, so we have to feed longer in the winter. I used to open the gate in January and February and they could find grass. That was in the ’80s and ’90s, but not so now. It started about four or five years ago, I can’t remember exactly. We got well over a hundred inches that winter and since then there’s been enough snow in winter to keep the grass from showing.”

More variable weather has also increased the complexity of managing spring grazing at Cates Family Farm. “In the spring of 2012 there was record heat and I was in my shorts moving fence on March 15. I have a picture of it. Then in April of 2013, we got record cold. It was awful, it was still winter, it never got warm! That was the biggest challenge on our livestock. Normally, by April 1 it is starting to change and by April 10 you have cold rain and green grass. In 2013, we couldn’t graze them until the end of April and then they were still mucking around in the mud. The cattle were very stressed during that period. The hot wears them down, but that cold weather in April when their hair is wet and they are mucking through the mud and they are not getting good forage quality, boy it was really tough on them.”

Dick has made some changes to management to reduce risks from more variable weather and extremes. He has reduced his stocking rates over time to be sure that the farm can produce sufficient forage for their cattle during more frequent dry periods and droughts. He has also thought some about how to reduce hay costs, perhaps by purchasing hay from a number of different suppliers in summer or renting some land and growing his own.

Another change might involve adding irrigation to some pastures that suffer more during dry periods. “I have friends who are looking at a K-Line irrigation system, the kind that you can drag around the pasture behind an ATV. That would be something that I may have to look at. Several friends have already done that.”

Although Dick plans to retire in the near future, he feels confident that grass-based livestock producers in Wisconsin have the resources needed to successfully manage the increased variability and extremes in weather. Dick explains, “I’ve been blessed by my connections to the Wisconsin grazing networks and our Wisconsin producer groups, as well as the Farm Bureau Federation, the Wisconsin Farmer’s Union and Wisconsin Grass Works. Our extension agents are really good.” At the same time, Dick wonders about farmers just entering the business. “When I was starting out,” he says, “the biggest issue was marketing and now, honestly, for new farmers I think it will be the uncertainty of the weather.”

Dick and Kim Cates have been recognized for their stewardship of the natural resources at Cates Family Farm with the 1998 Wisconsin Conservation Achievement Award and the 1999 Iowa County Water Quality Leadership Award. In 2013, Dick and Kim were recognized by the Sand County Foundation with the Leopold Conservation Award.