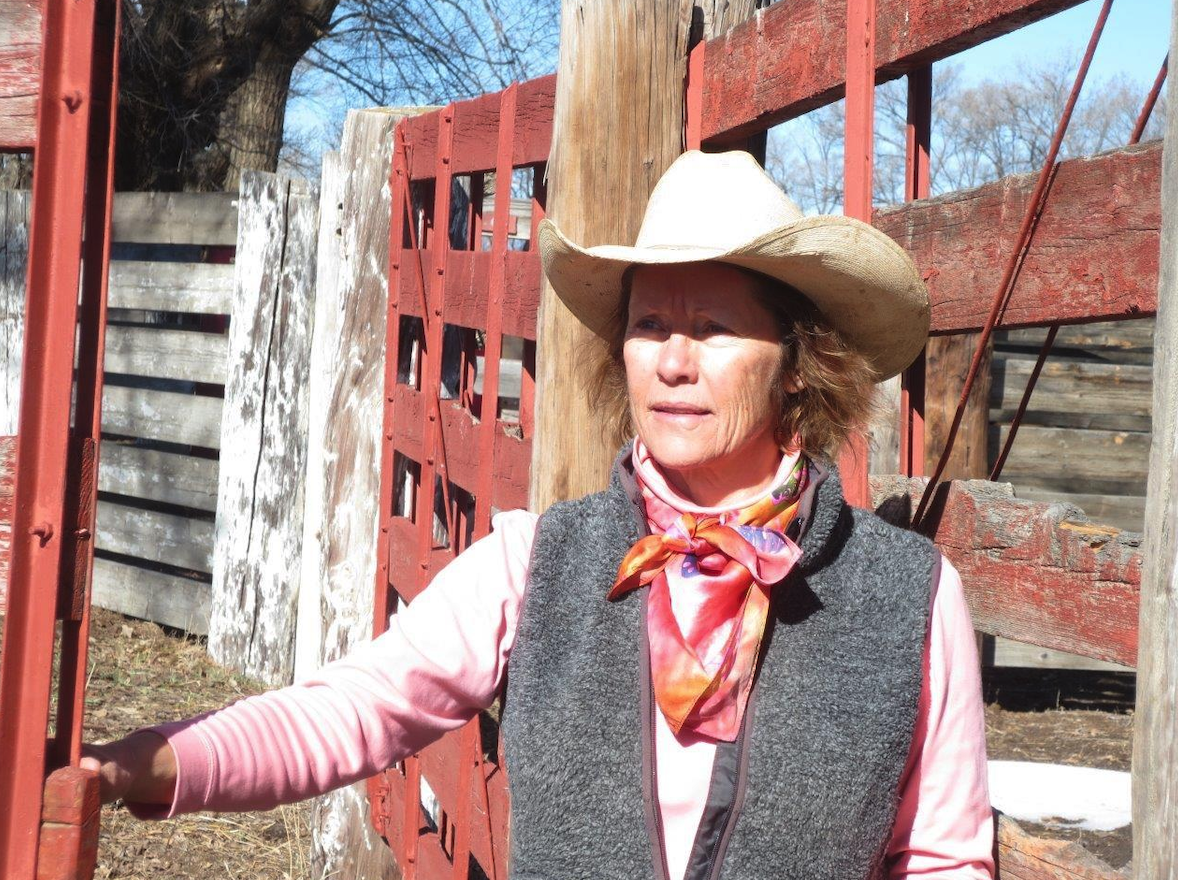 We have several rivers that run through the ranch and during all of my childhood and young adolescence the rivers were always flowing. You could count on them as a source of water for livestock. That has definitely changed over the last few years. The rivers now routinely dry up in stretches and that has been devastating in terms of pasture use. So we have had to really scramble to address our water system where always before the rivers ran through most of the pastures.

The CS Ranch is located on 130,000 acres of upland shortgrass prairie at the foot of the Sangre de Cristo Mountains in northeastern New Mexico. Cattle and quarter horses have been the focus of production since the ranch was established by Frank Springer in 1873. Today, Julia Davis Stafford and her five siblings, Springer’s great-grandchildren, work together to manage cattle production and marketing, farming, hunting and quarter horse production.

Julia was raised on the ranch and has actively worked with her family to manage the cow/calf and stocker enterprises for more than thirty years. She takes the lead on strategic planning and water resource management for the ranch, and manages cattle production on the headquarters division near Cimarron. Julia uses planned grazing practices to raise cattle on native grasslands and improved hayfields, which are irrigated from the Cimarron River.

For many years, the cowherd numbered between 2,500 and 3,000 head, but fifteen years of continued drought have forced Julia to destock the ranch, and today the herd is down to about 850 head. CS Ranch sells cattle mostly into wholesale markets with some direct sales locally.

Over the years, long-term weather challenges on the ranch have included variability in precipitation, dry periods and drought. Because grassland production depends entirely on precipitation, either as rain or snow, dry periods and drought are challenging because the grasslands are so responsive to variations in precipitation. Wind also creates some challenges, because it tends to both dry out grassland through evaporative loss and cause soil erosion. Variability in winter snow is particularly challenging because the snowpack that builds up over winter in the mountains is the main source of river water on the ranch.

“New Mexico is very arid to begin with and cyclical drought is very common here, so what I think of as our average annual precipitation is about fourteen to sixteen inches of rainfall,” Julia explains. “That’s what we hope for. Most of our ranch is upland shortgrass prairie, and we have a little bit of irrigated ground along the rivers that we mostly use to graze and raise hay for winter feed. Keeping the hayfields alive in times of drought is really tough. So that’s led to us selecting varieties that are drought tolerant and trying to minimize tillage so that we can increase soil organic matter and develop better soil health to make the most of what moisture we do get.”

The hayfields used to be flood irrigated, but over the years water-efficient, center-pivot irrigation has been installed in most of them. The water supply on the ranch is almost entirely from surface waters fed by meltwater from the winter snowpack in the nearby mountains. “The winter snowpack has been slim to none over the past ten years,” said Julia. “Over the last decade of drought, the flood-irrigated areas have received water only sporadically. So a lot of the improved grass species, the bromes and orchard grass and those sorts of species, have disappeared, because we simply run out of water and can’t irrigate enough to keep them alive.”

Julia has noticed many other changes in weather in the past decade or so, particularly more variable precipitation and more extreme drought, warmer winters, and more wind. “Over time we tend to go in about ten-year cycles,” she explains. “But I think this drought has been longer than the last recorded cycle.” Julia has also noticed that winters have gotten warmer since she was a kid. “I couldn’t tell you exactly how much warmer in terms of degrees or anything, but it does seem that the winter temperatures have gotten warmer and we have less snow. Summer temperature is possibly warmer too, but that hasn’t struck me as being as noticeable as the wintertime temperature changes.” Winds, always a part of life in northern New Mexico, are different these days as well, according to Julia. “It seems like when I was a kid that wind blew mostly in the spring and the month of March was always very windy, but now it seems like the real strong windy times have increased and are more common throughout the year.”

These changes in weather have caused Julia to make some adjustments in production, most notably the reduction in herd size, but also in the management of the irrigated hayfields. “We’ve shifted very much over to a no-till type of approach under the center pivots,” said Julia. “Before, when we would plow up an alfalfa field, we would plant wheat and graze it periodically before planting a hayfield again, but we are going now to less and less planting or plowing, just less soil disturbance overall. We have shifted more to no-till and we are using perennial varieties that are good for both grazing and for making hay. The more that I’ve learned about soil health, the more obvious it has become that the less disturbance, the better. Having a permanent crop is better for the soil, better for the water, just better all the way around.”

Julia says that other ranchers in her community perceive many of the same changes in weather. Talking about the drought is “the first and automatic topic of conversation,” she says. “Everybody is bemoaning the drought. I would say that besides the drought being of tremendous concern, other ranchers also agree that that we just don’t have winters and the snowpack like we used to. And everyone is complaining about the wind. There is a very definite feeling of anxiety among other farmers and ranchers and townspeople around here about the lack of water, because many of the towns are facing water rationing and dwindling supplies and that sort of thing. People are leaving towns in this area and moving to metropolitan areas. I’m sure that weather is a factor in this because as agriculture decreases, business and prosperity in the area decline. There is definitely the perception that this is the worst drought that anybody has ever experienced.”

Julia says that the continuing drought has created some concern about the future at the CS Ranch. “I’d say there is anxiety over wondering, ‘Is this the new normal?’ There is just a real awareness that if you continue to destock, at a certain point, how can the ranch keep going with fewer and fewer cattle? We are also concerned about the impact on our livelihoods and on our employees. We haven’t really done any thinking ahead ten years and asking the question, ‘What are we going to do if things keep going this way?’

Thinking about the future, Julia feels fairly confident in the management practices she uses to reduce the risks of weather variability and extremes, particularly planned grazing, soil health, water conservation and the use of drought-tolerant forage varieties and cattle that are well adapted to the region. Julia says that if climate change continues to intensify, she’ll likely just continue to destock the ranch, figure out how to cut back on the need for irrigation and how to supply water to the remaining stock if surface waters were to fail.

Julia also plans to keep learning how to improve existing management practices and about new practices through participation in groups like the Quivira Coalition. “What is always tremendously encouraging to me is just the networking at these various agricultural gatherings, talking to people, and going to listen to them speak,” Julia explains. “Sometimes, particularly just after I get home from a Quivira Coalition conference, I feel we’ll be able to sort through this and go on just fine. And sometimes I feel really anxious about how we will keep going on if these same patterns — the drops in moisture and increasing temperatures — continue. If they continue to play out on those same paths, it’s going to be very tough in not very long.”

Julia has been actively involved in community-based governance of regional water issues for many years. She has served on the New Mexico Interstate Stream Commission, as a board member of the Cimarron Watershed Alliance and as a member of the Western Landowners Alliance. She is an active member of the Quivira Coalition.