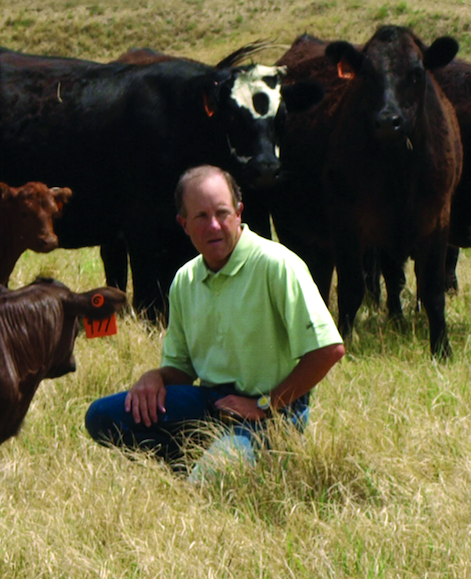 I think historically a person would be hard pressed to say that the drought we’ve been in recently is any more severe than what my father experienced in the 1950’s or my grandfather in the ’30’s. When you look directly at any one aspect of weather – variability, precipitation, temperature, length of growing season – those are always in flux. In the environment where we live, 40 degree fluctuations in temperature are not uncommon any time of the year. Our precipitation comes in concentrated periods of time and it’s not necessarily predictable. There is an inherent unpredictability about our environment.

The Legacy of Cattle in Colorado, Frasier Farms

Stockmanship Tips from the Ranchers Who Use Them

Frasier Farms is a family owned and operated ranch that spreads across 44,000 acres of rolling native shortgrass prairie in Eastern Colorado, where the land is dry and the wind is almost always blowing. Brothers Mark, Joe, and Chris Frasier manage the ranch in two divisions, one near Limon and the other near Woodrow. Frasier Farms produces cattle with an 800 head cow-calf and stocker operations and offer hunting leases and custom grazing. The rolling hills of native grasses such as blue gramma and buffalo grass are managed using planned grazing practices that improve soil health and the health of the grassland, recycle nutrients and enhance biodiversity on the ranch.

Mark Frasier has managed the Woodrow division of Frasier Farms for more than thirty years. In addition to the calves produced on the ranch each spring and fall, Mark buys stocker cattle each spring to run about 5,000 head when fully stocked. The cattle are split into three large herds and moved through 125 pastures on the 29,000-acre ranch, leaving 90 percent of the ranch free of cattle at any one time. Cattle produced on the ranch are marketed to feedlots through value-added natural beef and source-verified programs. Mark also sells into higher value markets by planning production to catch seasonal high prices and retaining ownership of a portion of the cattle sent to feedlots.

Mark says that year-to-year variability in seasonal weather patterns, dry periods, drought and winds are the most significant long-term challenges to dryland ranching on the eastern Colorado plains. Particularly critical is the timing and type of precipitation through the year, because grassland response to weather conditions changes throughout the growing season. Mark explains, “Let’s put it this way: A two-inch rain in September doesn’t have near the value of two inches of rain in April or May. We just get a lot more bang from an earlier precipitation event. Spring rainfall tends to be a drizzling, all-day sort of affair in the best case. When we have the same amount of precipitation in the late summer months, it’s more likely to come in an afternoon thunderstorm, so it is not as effective in terms of capturing that moisture into the soil because there is more runoff.” Wind can also present some challenges to cattle management. “On the plains, especially in the spring,” says Mark, “we can have some very strong winds and we can have winds in the summer as well. If it’s hot, those summer winds can just whip moisture out of the soil and have a very great drying effect on the plants and the soil.”

Weather variability and extremes have always been a part of life in the Great Plains region, and Mark doesn’t perceive that there has been any change in these challenges in his lifetime. “Our operation is entirely native forages,” says Mark, “and the production that we get from that varies year by year per the growing condition that we experience. It has everything to do with temperature and the amount and timing of precipitation. In terms of first day frost, in terms of wind, in terms of how long the grass stays green, all those kinds of things vary year by year. No two years are the same and they never have been. So that’s really one of our challenges is trying to manage in a highly variable environment. We develop a plan but that plan has to have significant contingencies in it because the conditions will always change.”

Mark goes on to explain that the natural environment in eastern Colorado is well adapted to the weather variability and extremes typical of the region. “For example, the grasses are extremely opportunistic,” Mark says. “They don’t have a narrow window within which they need to grow or to put out seed or perform some other function. They will stay in near dormancy until conditions are just right and then they’ll just explode and we’ll have a significant amount of growth in a very few days. Plants have evolved in the sense that they are adapted to an environment that is unpredictable. Our environment is not ungenerous, but the plant has to be ready to grow when the conditions are right.”

This same kind of preparedness to take advantage of opportunity when it comes is a central feature of Frasier Farms management. “Personally, I don’t understand when people complain about not getting rain and then when it does rain oh, now it’s too muddy,” says Mark. “We constantly prepare for the next rain, because, generally speaking, our most limiting factor is soil moisture. If in everything that we do, we can create an environment that is receptive to precipitation, so that whenever it does come we can take advantage of it, we will just be that much more efficient and more effective. It’s an attitude or a philosophy that’s grown over time. It is something a person experiences in the sense that, after you’re unprepared a time or two, you begin to think ahead a bit more. So it’s just a function of maturing and management, I think, as much as anything else.”

Mark draws on many resources to enhance the capacity of Frasier Farms to weather variability and extremes, but the use of adaptive management strategies have proven key to his success. He explains, “I look at that key word, variability. You’ve got to have adaptive management to respond, both in terms of knowing how to respond, but also anticipating what a change will bring. Oftentimes making a timely decision is key, either in a cost-saving sense or in a sense of conservation of natural resources.”

Managing both a cow/calf herd and a stocker operation gives Mark the flexibility he needs to respond to changing weather conditions. “We have the two components.” he explains. “The cowherd is actually a smaller piece of what we do. We’re bringing in most of the livestock on the ranch. If conditions are not favorable for the growth of grass, we don’t bring as many cattle to the ranch or we can destock early or in some other way change the number of cattle on the ranch. That’s our control valve. We have certain performance expectations for the cattle. If conditions are not good, then we don’t meet those expectations, and on the flip side, if conditions are very good, we exceed them. It’s not a doomsday situation for us to pull the cattle from the grass because they’re destined for a feed yard anyway so the fact that they may be going to the feed yard forty-five days earlier than normal or weighing fifty or a hundred pounds less than what we expected is not good, but it’s not a complete disaster.”

Mark also uses some other tools to reduce weather-related production risk. He finds that long-term weather forecasts — one or two months ahead — can be helpful when making stocking decisions if conditions are dry. He is also trying out a new type of federally subsidized insurance that insures the livestock producers against a large deviation from normal precipitation. This “rainfall insurance” is a pilot program of the USDA Risk Management Agency and at present is only available in a few locations.

Thinking about the future, Mark is fairly confident that he has the resources needed to keep Frasier Farms healthy, productive and profitable despite weather variability and extremes, although his confidence is related to the particular situation, as he explains. “I’d say it is really situational. It depends on what the extreme is and when and how it presents itself. There are times when I feel very compromised just because there’s not much I can do at the moment. And there are other times that situations unfold more slowly and if you have the capacity to understand what’s happening, you can modify the resources you have or take advantage of opportunities to mitigate risks.” He feels fortunate to have had the opportunity to learn how to successfully manage grasslands and cattle in the more variable climate of the Great Plains. “I’ve seen extremes in almost every sense and so I know what comes next. I know what the end result is likely to be. I have been through it and I am prepared to deal with it. Although no one likes to be in that position, I’d say I’m comfortable with it.”

Mark is active in the civil life of his community and has provided leadership over the years to a number of community-based and agricultural organizations. He consults with other ranchers on holistic range management and is a regular speaker at agricultural events. Mark currently serves as the president of the Colorado Livestock Association. In 2003, Frasier Farms received the National Cattlemen’s Beef Association Regional Environmental Stewardship Award, which recognizes the outstanding stewardship practices and conservation achievements of cattle producers across the United States. Frasier Farms was profiled as one of sixty model U.S. sustainable farms and ranches in the USDA-SARE publication The New American Farmer: Profiles of Agricultural Innovation.