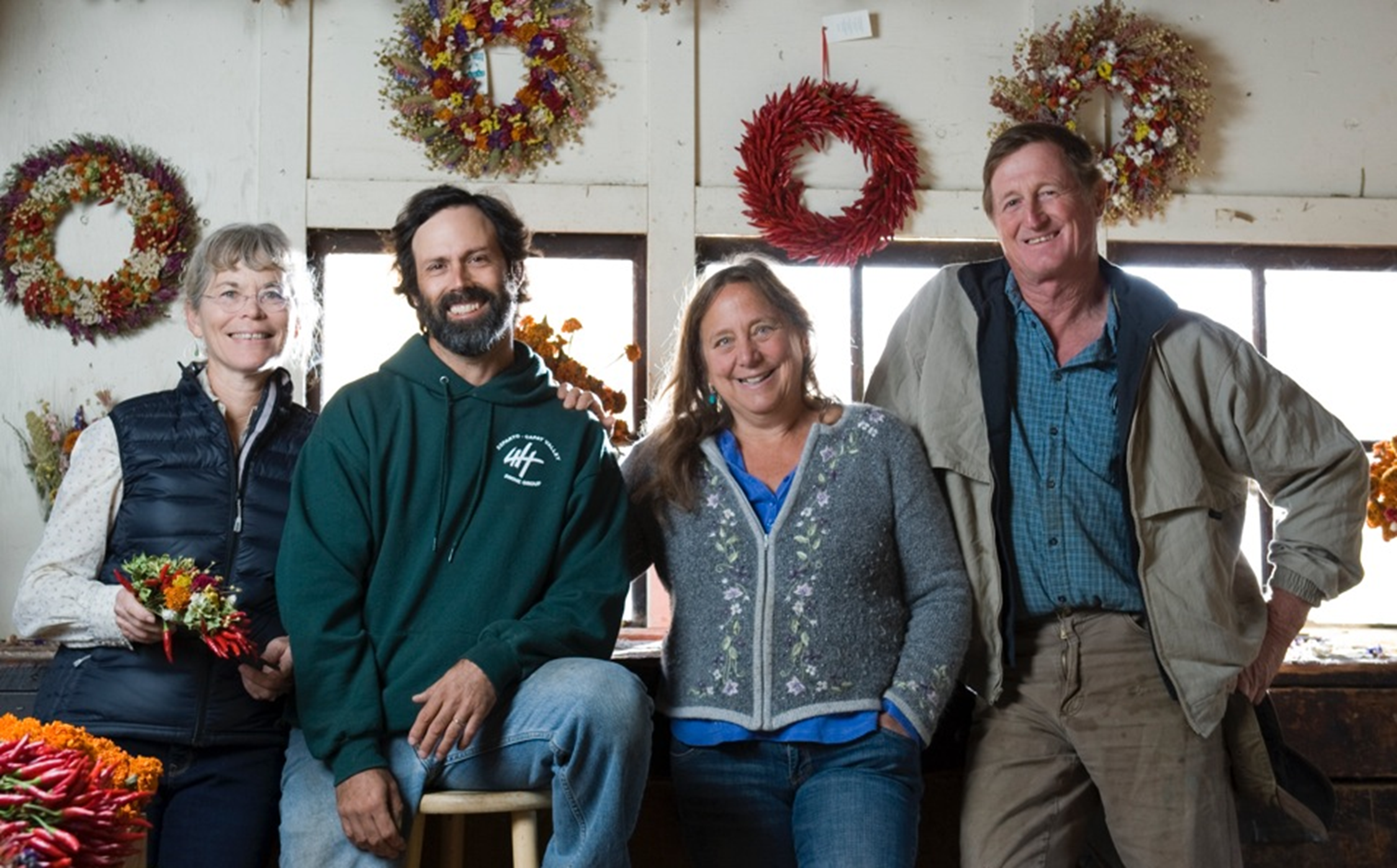 A lot of our practices are focused on conserving water. How do we capture the water that does fall on the ground, so it doesn’t run off, so that it goes into the soil? How do we make the water that we have go further? Water is the critical piece here in California.

Full Belly Farm, in the Capay Valley of Northern California, is a 400-acre diversified organic farm raising more than eighty different crops, including vegetables, herbs, nuts, flowers, fruits, grains and livestock. The farm landscape is home to a diverse interweaving of perennial orchards, annual crops and pastures, plus hedgerows and riparian areas managed as habitat for beneficial insects, native pollinators and wildlife. First established by Paul Muller and Dru Rivers in 1984, Full Belly Farm has involved an active partnership since 1989 among four owners who live in three households on or close to the farm: Paul Muller, his wife Dru Rivers, Judith Redmond and Andrew Brait.

Full Belly Farm was designed to be ecologically diverse to foster sustainability on all levels, from healthy soil to content consumers, a stable, fairly compensated workforce, year-round cash flow and an engaging workplace that renews and inspires everyone working on the farm. The productivity of the diversified organic system is based on the use of cover crops and the integration of sheep and poultry to capture and cycle crop nutrients and water, maintain soil health and prevent losses from pests and disease. Virtually all of the production on the farm is irrigated, mostly with water from Cache Creek, which runs along one side of the property.

The farm sells to a diverse mix of direct and wholesale markets in the San Francisco Bay area that includes restaurants, grocers, farmers’ markets and a 1,500-member CSA . Full Belly also supports a number of outreach programs to help create awareness of the importance of farms to all communities.

According to Paul Mueller, three years of extreme drought coupled with dryer and warmer winters, longer and more variable spring and fall seasons and greater weather extremes have created both opportunity and challenge on Full Belly Farm. “The last couple of years we have had the driest January and February on record. That’s the time of year we normally get the moisture that goes deep in the ground, the moisture that serves as the reservoir for our crops that come in the spring. They get their roots down deep and draw on that water. The last couple of years, it just hasn’t been there.”

Declining water supplies have made growing the cover crops so crucial to building soil quality and providing nutrients for crops more challenging. Increased weather variability has made planning and conducting fieldwork more difficult by reducing the periods when work can be done without damaging soils and crops. Paul explains, “Normally we can’t prepare ground for planting in February, but it is so dry now that we can. The challenge is that you’ve got to get your groundwork done as early as possible and when the time is right. We used to get light rains in fall that moistened things up and made large windows to prepare ground, but now variability has narrowed windows and made them less predictable.”

The longer, more variable springs and falls have complicated crop management, but also created opportunities by increasing the length of time the farm can produce valuable spring and fall crops. “The way I look at it is, we are gambling more on the edges. Summer temperatures have been relatively stable, so we can hit our main summer season, but now our main season shifts a couple of weeks forward or backward but those summer crops — melons, tomatoes, beans, peppers — remain the same. If spring weather is unseasonably hot, our spring will end sooner than we thought. If our summer is unseasonably long, then tomatoes will go longer, but the fall crops won’t do quite so well because we did not get them planted early enough. And maybe in mid-winter, the January, February crop mix, if it’s unseasonably warm, we’ll harvest more crops in those months than we normally do. Our crop mix is not changing a lot, but we’re more conscious of how we plan for the edges.” Paul goes on to say that increased weather variability means the edges can have “bigger bounces” and more extreme swings, but that the farmers can push the edges, and sometimes they do really well.

Although water conservation has always been a management focus at Full Belly Farm, heavier rainfall, longer dry periods and continuing drought have encouraged even more thinking about sustainable water management. Paul says that the management team is considering changing up their crop mix to include more drought-tolerant cover crops and is exploring potential cover crops that do better on less water or produce more with the same amount of water than their current cover crops. They are also looking at ways to use cover crop mulches to conserve soil moisture and are weighing the costs and benefits of more water-efficient irrigation systems such as drip and microsprinklers; these involve significant initial investment and add management challenges because they require filtered water, which the farm does not need now.

The managers are also working on landscape-scale improvements in water management. The main water source, Cache Creek, drains a large watershed above the farm. The low fields near the creek are kept in winter cover crops to reduce soil loss in the event of a flood, which would be most likely to occur during heavy winter rains. The farm also actively manages riparian zones along the creek so that when it overflows its banks, flood waters will move over the lower parts of the farm without damaging production areas.

Looking to the future, Paul expressed a number of concerns about the lack of coordinated planning for agricultural adaptation to climate change in his region and elsewhere. He also believes that the recent spike in farmland prices in Northern California is related to climate change. “Investors and growers are moving into more water-secure areas if they can. Other growers are trying to secure water access in other ways. For example, many are investing in deeper wells, even though that reduces water available to other farmers. There is a collision of interests that farmers are starting to pay attention to.”

He suggests that Northern California could reap huge dividends from an investment in a coherent rangeland management strategy designed to improve the health of the regional water cycle.

According to Paul, the new FDA food safety rule conflicts with current water recycling programs and could further restrict water availability in his region. “A lot of the FDA food safety rules are predicated on the assumption of an abundant resource, a stable water supply and a stable climate.” Paul would like to see more programs with NRCS to look at climate threats and develop strategies to create a balance of ecological health and farm protection. “There was a study from Stanford a number of years ago that said that agriculture is being overlooked as a sector that, one, has the largest impact on land use in the country, but two, doesn’t have a coherent strategy as to how they address rising CO2 levels. So maybe under that corn in the Midwest, there could be clover growing, so that as that corn’s done, the clover’s there. And it’s sequestering carbon all fall, and into the spring it starts again. And maybe we invest in other equipment that will allow that to happen, rather than just using herbicides. Let’s take a serious look at polycultural systems and other multilayered systems that provide greater ecological services in terms of sequestering carbon and enhancing climate resilience, and let’s pay farmers for using those practices.”

In the years since this 2014 interview,  Full Belly’s focus on food and farming designed to promote the health of land, people and community has served the farm well through a series of unprecedented disturbances and shocks: continuing drought, wildfires and a global pandemic.   Judith Redmond stepped down from active management of the farm and Paul and Dru’s children, Amon and Jenna Muller, have joined the partnership team.  Paul has continued to explore soil management practices that sequester carbon and enhance climate resilience, most recently as a recipient of a USDA Conservation Innovation Grant to explore no-till management options for the farm.

In a January 17, 2022 News from the Farm blog post on Full Belly Farm’s website, Paul shares some of the questions ahead in the new growing season. “This week on the farm,” Paul writes, “talk is turning to planning as we begin our annual cycle once again.  We will meet for collective crystal ball gazing and we will go over each crop for a thumbs-up or down, mapping a strategy for this year’s production. Plans are also being mulled over for cover crops, soil improvements, new biological fertility amendments and strategies to enhance our farm’s resilience. This week we try to hone quantities to plant, project market changes that include CSA numbers, and determine the balance between sales to wholesalers, restaurant and local stores and direct to customers.”

“We must balance that prognostication,” Paul continues, “with the anticipation of crew size. We realize that our 80 or so core workers are all are a year older with changing capacities to be physically able to plant, tend, harvest and pack. There are new labor laws increasing minimum wage and rules changing overtime for farm workers that need to fit into both plans and budgets. These laws are just and past due, but they certainly complicate the budgeting for a farm where labor is near 40 % of our annual expenses. We always add workers returning here in the busier summer months, yet there are fewer farm workers to do the jobs of harvest and stewarding California’s fields, making competition for field workers a critical unknown.”

The farm’s co-owners have collected numerous awards over the years for their success in creating an exemplary model of sustainable agriculture. In 1999, Paul and Dru were named Outstanding Farmers of the Year by the University of California Small Farm Program. Full Belly Farm has been recognized for their leadership in sustainable and organic farming with a 2005 Steward of Sustainable Agriculture or “Sustie” award from the Ecological Farming Association, the 2006 USDA Patrick Madden Award , a Growing Green Award from the NRCD in 2009, and the Leopold Conservation Award in 2014.