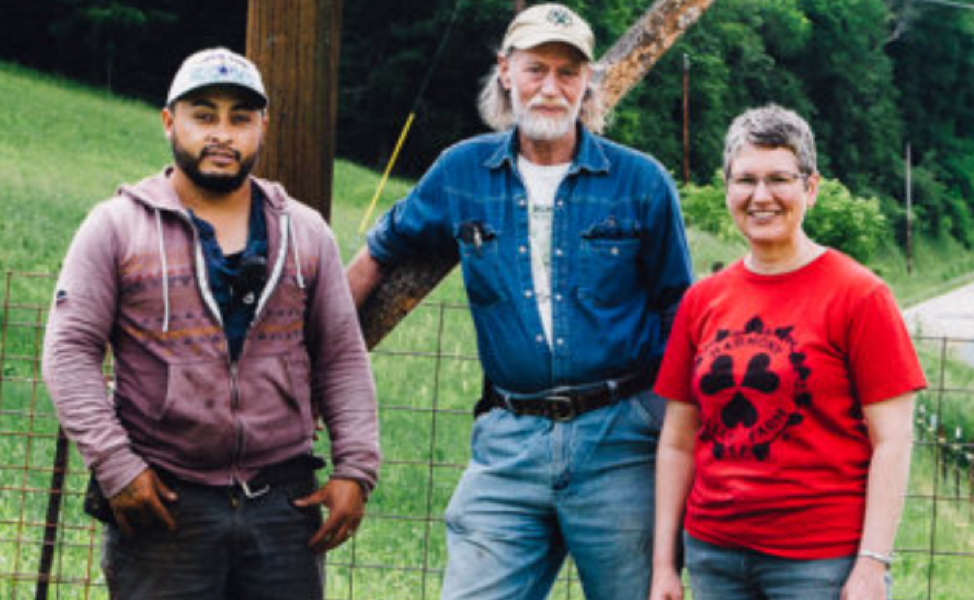 In August of 2007 we got hit really hard with some really weird flooding caused by 18 inches of rain in a less than a 24-hour period. A lot of crops were peaking just then, like tomatoes. We had pretty big losses because a lot of our farm land is along the Bad Ax River. They called that a thousand year event. And then we had another one nine months later. That was when I said, ‘There’s no such thing as normal anymore’.

Harmony Valley Farm is a diversified farm that spreads out over 200 acres of cropland, pastures and forest near Viroqua in southern Wisconsin, about two hours northwest of Madison. Richard de Wilde and Andrea Yoder, the co-owners manage the production of about 100 acres of organic vegetables and berries at the farm and on some leased land nearby.

Richard is a cofounder and master grower at Harmony Valley Farm, established in 1985, and applies his forty-plus years of farming experience to the integrated management of a healthy natural growing environment on the farm. Richard has always made managing for soil health a priority, believing it to be a key contributor to the success of the farm. Over the years, he has developed a system of cover cropping with green manures, applying natural rock powders and incorporating compost to maintain healthy soils. He controls pest by managing perennial habitat and nesting sites for beneficial wildlife including raptors, songbirds, bats, wasps and insects. Harmony Valley Farm is best known for its season-long, high-quality salad mix, sauté greens and spinach, as well as root crops harvested in the fall and distributed throughout the winter. The farm also produces grass-finished beef using intensive grazing practices.

Harmony Valley Farm sells organic produce, berries and beef through direct and wholesale markets, including a 1500-member CSA that runs from May through January with deliveries locally and to Madison, WI, and Minneapolis and St. Paul, Minnesota. The farm also sells at the weekly Dane County Farmers Market, and to retail grocers and wholesale distributors throughout a large area from the Twin Cities to Madison. It employs a large team that varies from fifteen to sixty members, depending on the time of year, to produce and market its products.

Starting about seven or eight years ago, changing weather began to require some changes in production practices at the farm. More frequent heavy rains and stronger winds, more variable springs, warmer summers and longer falls have complicated vegetable production, according to Richard. “River bottom land is the best kind of land for growing vegetables in our area. And it’s great in dry periods, because we can irrigate out of the river.”

But the farm’s million dollars in losses in 2007 and 2008 as a result of unprecedented flooding really got Richard’s attention. “Not many people understand that vegetable farmers have little to no insurance against weather. We can participate in the USDA’s NAP program and we do. N-A-P is the abbreviation for Noninsured Agricultural Production. Noninsured meaning it’s not corn, soybeans, cotton, wheat. It’s not a commodity. NAP is a poor program. It is. It’s totally inadequate and we really don’t have much else. After the flood in 2007, USDA did not help us out. But if you’re a corn farmer, you can buy government-supported, 90-percent-guaranteed income on the corn crop. It’s gross. We should care more about feeding people than raising corn for export and ethanol and corn syrup.”

Richard remembers when weather used to move pretty predictably from west to east. During the 2007 flooding, he noticed for the first time a weather pattern that he associates with severe weather. “Something that I had never seen before the 2007 flood is a pattern of southerly flow bringing moisture up the Mississippi River Valley. The moisture turned in a circle before it hit the Great Lakes and then it just looped back on us and didn’t stop. It just didn’t move off and that’s why we got eighteen inches of rain. Now we have these weird looping events. I’ve seen it several times since and now it just scares me when I see that loop.”

Other than the extreme flooding events, most of the changes in weather Richard has observed are more severe expressions of familiar seasonal patterns. For example, extreme swings in the timing of spring are more common these days. For many years, spring planting at Harmony Valley Farm began reliably in the first week in April, but in the last decade it has begun to vary by almost a month, which increasingly complicates spring planning and transplant production. Falls generally are longer but more variable, so Richard has extended the fall production season “knowing that we are going to get burned sometimes.”

Richard also has noticed that winds seem to have become more frequent and intense. “Strong winds have definitely become more of a factor in the last few years. We have more wind and stronger wind. We lose row covers more often now. We’ve had more problems with row covers — even if they’d stayed on, there were so much wind that the movement of the cover abraded the leaves and so we have crop damage even under the cover, even if the cover stays on. In the winter, it used to be that the winds died down at night. This winter we’ve had an amazing amount of night winds and that brings more risk of wind chill.”

Looking back on the years since 2013, Richard recalls that 2014, 2015 and 2016 were “pretty good years” at Harmony Valley Farm and he was able to “save money for a rainy day.” And it was good that he did, because over the next four years, Richard says the weather took a turn for the worst.  “We’ve had four extremely cold, wet springs in row,” he explains, “and every single one set a record for the latest first day in the field. But then, not very long after that, it turned so hot that it was unbelievable.”

Three of these four years, flooding repeatedly damaged creek banks and low-lying fields, including one storm in 2018 that washed away five acres of top soil from one of Richard’s best fields. This combination of cold, wet conditions and extreme temperature shifts in the spring, plus heavier rains late into the fall created a number of disruptions in crop nutrition, crop pollination and harvest operations.

Richard has managed the crop nutrition challenges by making a shift from providing nutrients to his crops with fall-applied compost and winter cover crops to applying fertilizers during the spring and summer growing seasons based on regular crop testing. “We were seeing nutrient deficiencies that just did not make sense. We had problems that we’ve never seen before, fertility problems that shouldn’t have been there because there was plenty of nutrients in the soil. We were able to correct it pretty easily by applying fertilizers through our drip (irrigation) tape, but we have almost twice the fertilizer bill in these really heavy wet years as what we normally would.”

Generally wetter conditions through much of the growing season got Richard and his management team thinking about how to protect the soil from erosion during heavy rains and at the same time improve conditions for fieldwork. “We are developing a whole new system of low growing ground cover for the area in between our beds,” Richard explains. “Our beds are raised a little, and that’s a good thing because the water runs off the bed right away, but we were losing so much soil off of almost level fields with all the heavy rain. We went to this system of planting a mix of the shortest white Dutch clover we could find and the shortest grass that we know – creeping red fescue – in between the beds.” Richard says that they still have a few challenges with this new system to figure out, but it has reduced soil erosion, plus “for harvest, it’s really pleasant. You’re not walking in mud, you’re walking on the lawn.”

Damaging flooding has required more attention to cleaning up the creeks and dry washes that run through the farm to reduce the chances of water building up behind floating debris and overflowing into adjacent farm fields during heavy rains. Richard has abandoned several fields that have repeatedly flooded over the last five years and converted one flood-prone field from annual vegetable production to permanent pasture which is leased to a neighboring dairy farmer for custom grazing. “We said no more, three strikes and you’re out,” Richard explains. We are just not going to farm it anymore if it floods.”

Richard has always viewed good management as the most important part of cultivating climate resilience at Harmony Valley Farm. He appreciates the energy and enthusiasm for figuring out how to manage new weather challenges that the younger farmers on his management team bring to their work. “They’re not set in their ways,” Richard says. “They don’t have a preconceived notion about how it’s going to be. They are just learning and they are willing to try anything. I’m not sure I’d keep doing it if it wasn’t for them.”

One of these younger farmers, Raphael Morales, recently became the newest partner in Harmony Valley Farm.  After working 10 years on the farm as an H-2A temporary worker, Richard sponsored Raphael for a permanent visa. “Now he can be here year-around,” Richard explains, “which is what you need to be able  run a farm.”

Richard de Wilde has received national recognition for his long record of success as an organic grower and as a CSA marketer with a Sustie Award from the Ecological Farming Association and a Farmer of the Year award from the Midwest Organic and Sustainable Education Service, both in 2003.  Harmony Valley Farm was profiled as one of sixty model U.S. sustainable farms and ranches in the USDA-SARE publication, The New American Farmer: Profiles of Agricultural Innovation.