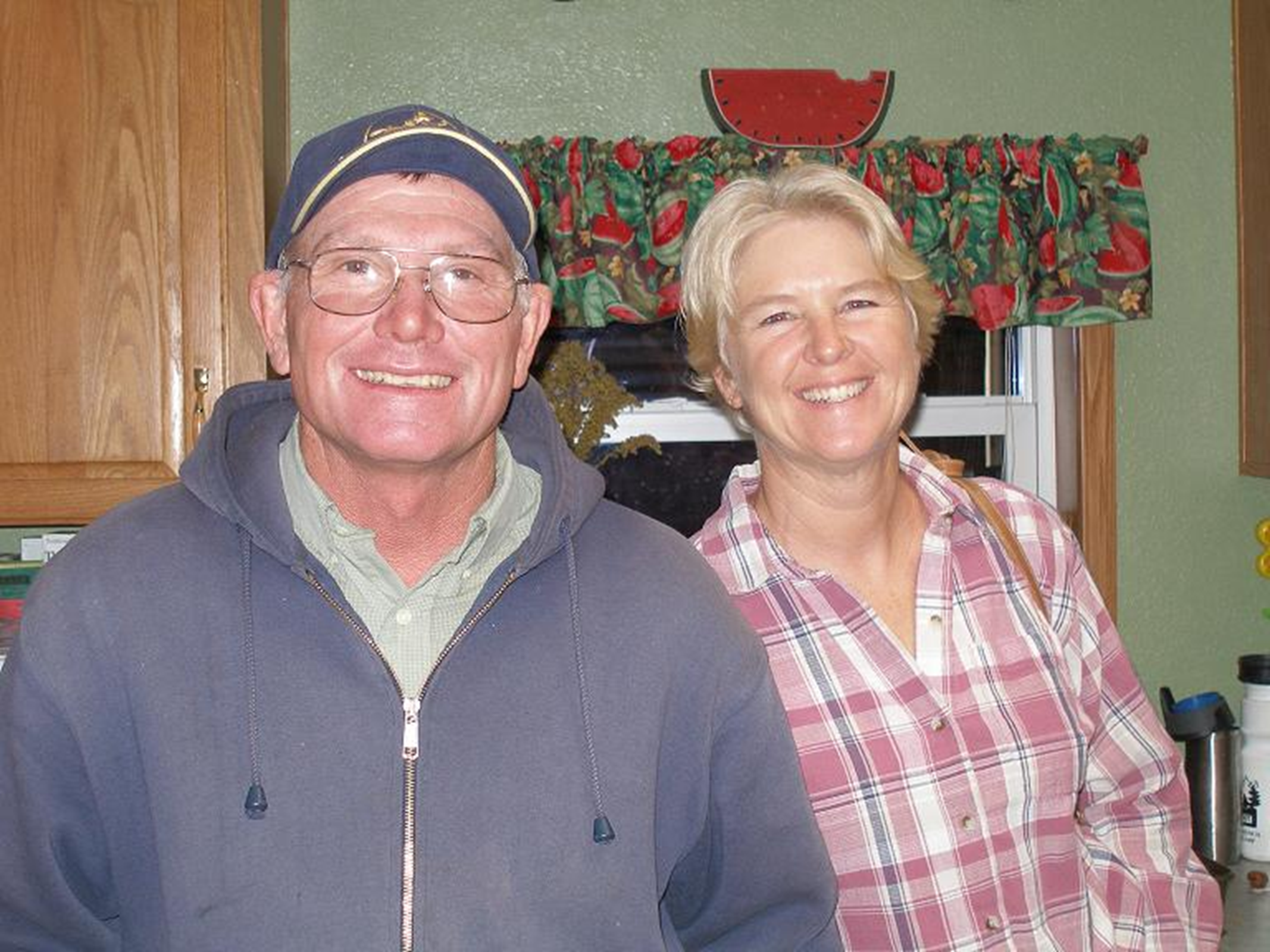 We here in Colorado have been in and out of a drought since 1998 and more in a drought than out so water out here is everything. We have to irrigate in order to get a crop, so water is a huge problem especially since most of the fresh water is owned by the farmers and all the cities are taking that water away.

Getting Creative in Colorado: An Oral History of the State’s Oldest Organic Farm

Jerry and Jacquie Monroe are the third generation to farm his family’s 20-acre “homeplace” in Kersey, Colorado, about an hour northeast of Denver. Monroe Family Farms is the oldest organic farm in Colorado. When Jerry and Jacquie took over from Jerry’s father in 1991, they went into the business of growing organic vegetables in a big way, adding 175 acres and starting the first CSA in Colorado in 1993, because they wanted to work closely with people who appreciated their farming philosophy. Today, the farm produces a hundred different kinds of vegetables and all the pasture, hay and feed grains needed to produce pasture-based meats (beef, pork, and lamb) and eggs on site — all of it USDA-certified organic. With the help of seven employees, Jerry manages the crop and livestock production while Jacquie manages sales and distribution for their year-around, 650-member CSA. The farm also markets to select restaurants in Denver and Boulder.

The Monroes emphasize soil health, water and energy conservation on their farm. They maintain soil health by integrating livestock into a diverse rotation of vegetables, alfalfa and feed grains. Irrigation has been upgraded from gravity-fed, furrow irrigation to more water-efficient pivot and drip systems and they use tailwater ponds to capture and return to the fields any surface runoff that occurs during irrigation or rainfall events. Produce for the winter months of the CSA are stored in dugouts, pits and straw-bale buildings, to reduce energy use. Jerry and Jacquie have succeeded with a philosophy of growing ample quantities of organic, life-filled and healthy foods while conserving and respecting the natural environment and to providing an educational experience working with Mother Nature for any CSA members who want it.

Sixteen years of extreme drought combined with higher summer temperatures, warmer winters, more extreme weather and a longer growing season have put the focus on water efficiency. “Water management has become huge,” says Jacquie. “Jerry has to keep track of how much water we have, how much he’s used. Everything has been flood irrigated here. Back in the day, they dug ditches and then had these pipes that went over the ditches and fields were just flooded to irrigate them. When you flood irrigate the top of the farm gets more water and the bottom of the farm gets less water and in the middle is the only part that gets the perfect amount of water.”

“Then we had to start conserving water because of the drought so we started putting in drip irrigation. I would say we have sixty acres of vegetables. When we first started with the drip irrigation, we put ten acres in. We’re up to probably forty acres of drip irrigation. And the rest of the crops are now under a new center pivot that we put in just this year because of the shortage of water. We want to make sure that we can continue to grow vegetables and the pivot and drip irrigation it puts that exact amount of water throughout the whole entire system. We are doing a lot more with water management. I don’t know that we would have done if our weather hadn’t changed and we hadn’t been so dry.”

Jacquie says that another change that has come with the drought has been more challenging weeds. “Weeds are starting to go crazy out here. We’re finding some of them are becoming very invasive. I can give you two examples. We’ve always had what’s called goatheads. It’s a small weed that grows very low to the ground and has a burr that sticks in your tires and in your shoes. It used to be only in certain parts of the farm, but now it seems to be going everywhere. The other one is sunflowers. We’ve never had sunflowers here before the drought. They are literally taking over all of our ditches. Anywhere that you can’t mow or get to they grow like trees and we can’t seem to get rid of them. These weeds are getting to be a problem for us. We’re trying to do a lot of mowing to try to keep them down, but the darn things adapt. They’re growing shorter now and growing a head and flowering close to the ground where the mower doesn’t hit.”

Like many other vegetable growers across the nation, the Monroes have also found opportunity in the longer growing season created by the changing climate. Jacquie estimates that in the last decade they have extended their growing season nearly two months with the help of some physical protection for frosts. They are in the field about a month earlier in the spring and can extend the fall harvest season about a month longer than they used to. “We’re picking things by the first of June and that’s never happened in our lives. That is crazy to think that we are able to produce something and harvest it by the first of June when our official last freeze date is May 15. We’ve extended our harvest season and our income has increased because of it.”

Jacquie and Jerry’s twenty-two-year-old son is weighing the pros and cons of joining his parents in the farm business. He would like to become the fourth generation on the farm, but competition for water in the region makes it difficult to imagine a lifetime in farming. “We are very concerned in the future about our water rights and whether or not we’re going to be able to get our water,” says Jacquie. “The cities are buying the water off the farms and taking it back to the city so people can eat, drink, bathe and water their lawns. Our elderly farmers are selling out. Once a person has gotten to a certain age and there isn’t a family member who wants to take over the farm, they sell their water. I don’t blame them. They finally have something of value that somebody wants and they’re paying them well for it, but it sure hurts the rest of us.”

“I’m to the point where I’m going to start asking at our annual water meeting that the farmers quit selling it, that they rent it to the cities for the rest of their lives and the rest of their children’s lives so that we can keep control of our water. That way the farmers can still have some kind of control over what’s going on out here. The cities are drying up our farms. They say that seven hundred thousand acres is supposed to be dried up in the next ten or fifteen years. It means that water will never go back to those farms. Once it’s gone, it’s gone forever.”