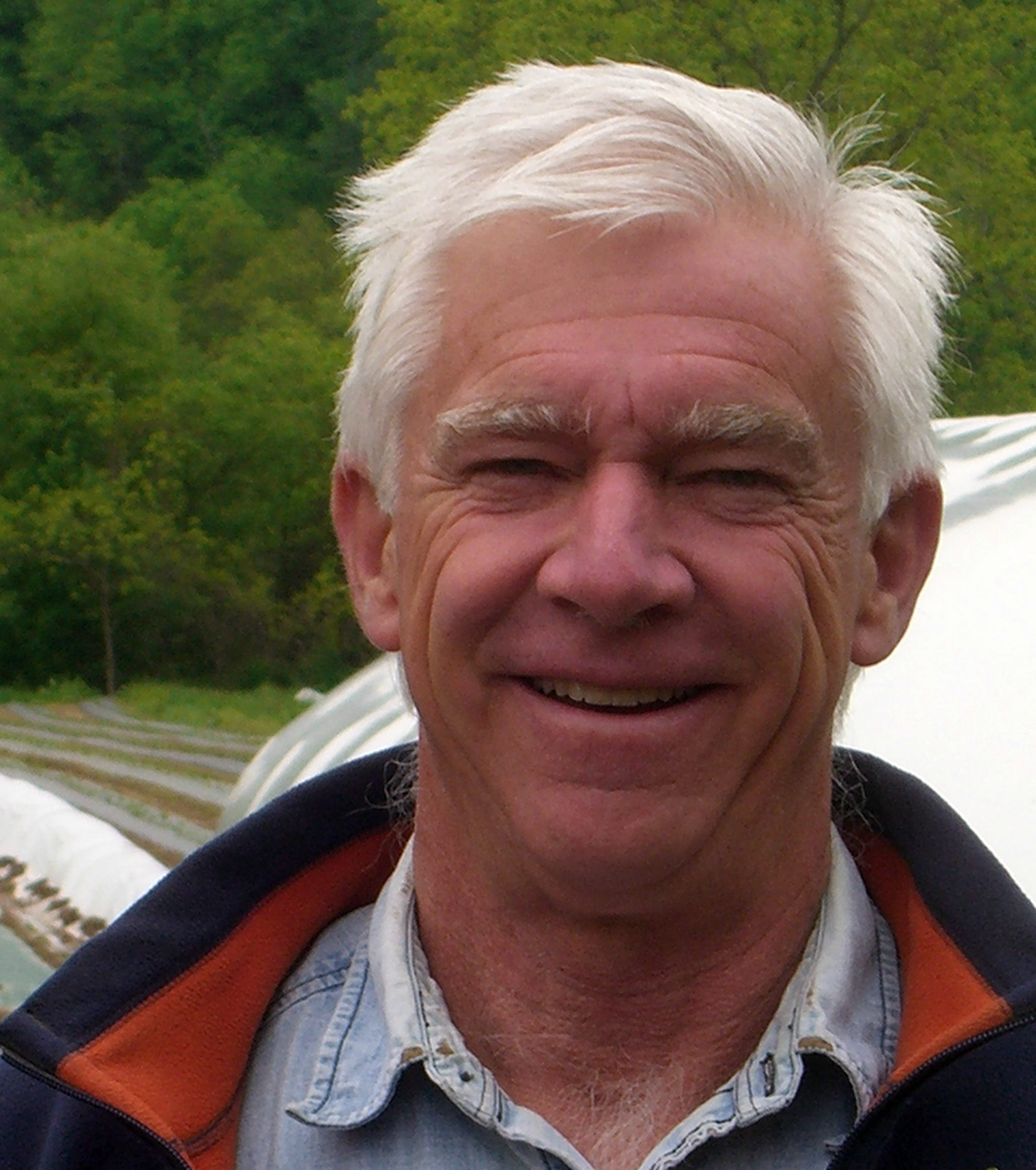 I realize now how lucky we were for so many years. We didn’t see many of the classic vegetable diseases at all for most of our years. But in the last 5 to 8 years things have really changed. Why is it that we suddenly have seen a whole range of really devastating diseases that we never saw before?

For more than forty years, Jim and Moie Crawford have owned and operated New Morning Farm, a 95-acre certified-organic vegetable farm in south-central Pennsylvania. Jim and Moie manage a diverse mix of vegetables and small fruits — about fifty different kinds — on 45 acres of the farm’s best cropland. They also sell eggs produced on the farm.

New Morning Farm has a greenhouse and four high-tunnel cold frames for transplant production and season extension, access to ample surface water for crop irrigation with sprinkler and drip systems. Soil quality is maintained with a diverse crop rotation that puts about a third of the land in cover crops each year and includes the regular application of purchased and locally-made composts and plastic mulch. The farm employs six to eight year-round employees and twenty-five seasonal workers, including those participating in the farm’s well-respected apprenticeship program.

About two-thirds of the farm’s produce is marketed directly to consumers at markets in Washington, DC., while one-third is sold wholesale through Tuscarora Organic Growers, a marketing cooperative that Jim helped to organize in 1988 to coordinate the sale of fresh fruits and vegetables to retailers, restaurants and institutions in Washington, D.C.

Growing vegetables on bottom land in Central Pennsylvania has brought Jim Crawford a lifetime of intriguing challenges most of them related in one way or another to water. “I can remember my very first year farming, the big issue was it just kept raining all spring. The dry days were so few that we just couldn’t farm. People said, ‘Oh that’s just Pennsylvania. That’s just the way it is here.’…. Basically, our biggest challenge was to figure out how to farm when it was always raining.” Paradoxically, learning how to manage crop irrigation during frequent summer dry spells typical of the region was another big challenge. According to Jim, “Irrigation in this part of the country is a way bigger factor than many people realize. It’s just a huge issue for yields, quality and profitability, and production in general. Irrigation is an enormous challenge.”

About fifteen years ago, Jim began to notice shifts in weather on the farm. Temperatures seemed to be getting more variable and there was a definite increase in both heavy rainfall and summer drought. These changes seemed to intensify after 2010. “It’s really hard to draw conclusions, but the variability just seems so extreme in the last few years. We saw 80 degrees in April, in March and then in January. Those highs are then followed by real, real cold temperatures. Just extreme shifts in temperature, extremes you did not used to see so often. And there has been more drought and more flooding. We’re going through a drought right now that’s one of the most extreme that I’ve ever seen in forty years. I’m not complaining because we have been able to irrigate. It’s just that I think it’s another sign of extremes.”

One key to Jim’s success in managing vegetables in the typically wet conditions on his farm is the use of black plastic mulch as physical protection. The plastic mulch allows Jim to do much of his fieldwork during the fall and winter, when conditions are more often right for incorporating soil amendments and shaping planting beds. “What we have done now for six or eight years is to prepare beds and put plastic down on large acreage before we need it. That way the land is standing by and it’s ready when we need it. So the tillage is done, the spreading is done. Of course, we get weed control and moisture control out of it too, but the biggest thing it does for us is it keeps us on schedule.”

Like many other farmers, Jim has used the lengthening growing season to his advantage. For example, with the addition of physical protection in the spring and fall, he has been able to extend his harvests of sweet corn and snap beans. “We have actually doubled the number of weeks that we harvest sweet corn and more than tripled the weeks of green beans. We’ve drastically increased the length of our season for those two crops.” But Jim acknowledges that improved season-extension practices have played a large role in lengthening harvests too. “It’s definitely not all weather. We’ve also had big successes on season extension with various techniques. But it does indicate that the growing season is longer. And I have to say we have made money on it, even though it makes me very uncomfortable because I know it is a sign of climate change.”

Another sign of a changing climate may be the increasing costs and management challenges created by a growing number of novel plant diseases. Late blight arrived on the farm for the first time in 2003 and has been a frequent disease problem in Jim’s tomato crop since then, significantly reducing yields in four of the last ten years.

Another recent arrival to the farm is downy mildew. “We didn’t see downy mildew in cucumbers until 2007. Now we see it every year, around the first of August. It wipes out the cucumbers. No more cucumbers. It’s really dramatic. It’s amazing to me. We used to have a full cucumber season from June to October and I can remember beautiful crops of cucumbers in October. Cucumbers lying everywhere. Now, we don’t see a cucumber here after the beginning of August.”

Other costly new diseases that have arrived on the farm in the last decade are Alternaria in brassicas, a mildew in basil and a rust in their raspberries. Jim explains, “We grow a lot of basil, it’s one of our bigger crops. It’s in our top ten of the fifty crops that we grow. We went for decades never having a disease problem with the basil and now we have disease all the time, every season, all season long. But the biggest new disease is this rust in our raspberries, which are a pretty big crop for us. We never saw it until last year when it wiped out the whole crop starting in July. We thought we were on top of it this year and now here just this week, it’s back and it’s wiping us out again. Thirty-eight years, we never saw it. Now we’ve seen it two years in a row. It isn’t a little problem. It destroys the crop.”

Central Pennsylvania is in the path of Atlantic hurricanes, which make a regular appearance on the farm. “Hurricanes are the single weather events that have definitely cost us, by far, the most money over the years,” says Jim. “They usually come in September. That’s been our most vulnerable times. Although we’ve had them through the years, the biggest ones ever have both hit in the last decade. Both came in September and both wiped out probably a third of our year’s production all in one day.” Jim has investigated insuring his crops through the USDA, but found that the programs available to him were not appropriate to his farm because of his crop diversity and the value of his crops relative to conventional vegetable farms.

In 2019, Jim and Moie began transitioning the business to Jenni Glenister, a long-time member of the management team who joined the farm as an apprentice in 2009. The sale was completed in June 2021.

Over the last decade, Jenni and Jim have made major changes in farm operations to manage increasingly challenging weather related risks. They have moved crop production out of low-lying landscape positions on the farm to reduce the risks of heavy rains and flooding, dropped some profitable crops – such as fall brassicas, strawberries and raspberries – that have become too risky as weather patterns and pest pressures have changed, added some redundancy into crop planning to allow for weather-related adjustments during the growing season, and dropped wholesale markets in order to maintain revenues at a lower volume of production.

Jenni and Jim continue to rely on some proven climate risk management tools at New Morning Farm, including: the adaptive analysis of risk and profit for individual crops; a focus on soil health; an effective irrigation program; fieldwork flexibility through the use of physical protection and multiple strategies for accomplishing specific tasks such as planting, cultivation and harvesting; and active participation in research and educational programs hosted by the Pennsylvania Association for Sustainable Agriculture.

Jim regularly leads farming workshops, gives lectures and hosts field days at the farm for farm organizations and local colleges and universities. In 2002, the Crawford’s were recognized for their long and active support for organic farming with a Leadership Award from the Pennsylvania Association for Sustainable Agriculture.  New Morning Farm was featured as one of sixty model U.S. sustainable farms and ranches in the 2005 USDA-SARE publication The New American Farmer: Profiles of Agricultural Innovation.