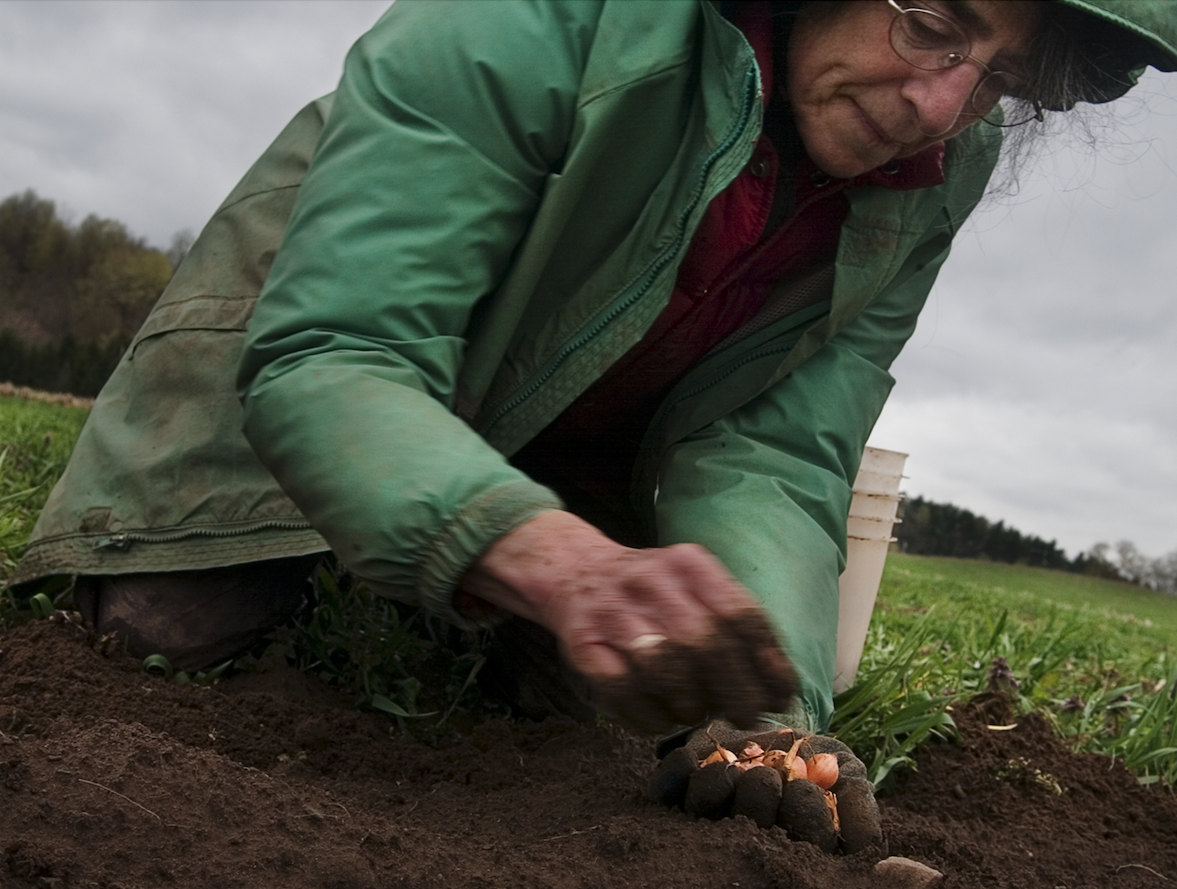 When I started farming there was a pattern to the weather, one year was kind of like the one before. I think it’s more challenging to be a farmer now. No two years are alike. You have to be more flexible, you can’t rely on a plan. You have to learn as many tricks as possible, because it might be dry or it might be wet. You have to be so nimble these days.

Elizabeth Henderson on International and Personal Perspectives on CSA

Dismantling injustice in the food system: An interview with Elizabeth Henderson

Elizabeth Henderson has grown organic vegetables for more than twenty-five years in Wayne County, New York, and is a founding member of Peacework Organic CSA. Peacework is located on 109 acres of prime farmland that has been protected from development in a unique community collaboration that enabled the Genesee Land Trust to purchase the farm and then lease it back to the farmers on a twenty-five-year rolling lease. The farm grows more than seventy different crops on 20 acres, including a wide variety of vegetables, herbs and flowers. The produce is marketed through a 300-member CSA over a six-month harvest season.

Designed to maintain soil quality and reduce pest pressures, cropping systems on the farm focus on summer and winter cover crops, organic mulches and some purchased compost. A greenhouse and hoophouses are used to produce vegetable transplants and extend the season in the spring and fall and ample water is available for drip irrigation from three wells on the farm.

Managing the effects of heat, drought and excessive rain on the crops and people of Peacework has got Elizabeth Henderson wondering about the challenges facing new farmers these days. Hotter summers, heavy rainfall, drought and novel diseases have required some adjustments to the farm’s management practices. “When we started farming, we didn’t have any irrigation. We could rely on the rain and the soil’s organic matter to get us through. There would sometimes be a couple of dryish weeks, but then there would be rainstorms in July, you know, thunderstorms and we could get through a season. Since about 2000, no two years have been alike. Really wet years, dry, dry drought years — and you never know at the beginning of the season what to expect. With the really erratic weather we found that we had to install trickle irrigation and dig a well in each field so we could have reliable water. And then when you have to use irrigation, about a quarter of your time goes in to managing that.”

Elizabeth experienced her first severe drought as a farmer in 2005, a year that the Farmer’s Almanac predicted would be average rainfall. “There was a quarter inch of rain between the beginning of May and the third week of September that year. One quarter inch! We had never had that before. And then it rained every day in October, so it WAS an average rainfall year!”

Higher summer temperatures and particularly heat waves have challenged both the plants and people at Peacework. “People who live in the South are used to really hot weather, but my partner and I are Northerners and heat just makes us totally miserable. We just have never experienced weather of over two weeks in a row over 90 until the past two years. That just makes the working conditions extremely difficult, and of course you get up earlier so that you can try and do harvesting during cool weather, but when it never goes down below 90 degrees there isn’t any cool weather for really good harvesting. It’s much harder on our people. It’s grueling.”

Elizabeth is thinking about how to apply some of the crop management practices she observed in South Korea and Taiwan to manage crops in the heavy downpours that have become more frequent at Peacework. “It’s getting harder to manage water on our farm. When rain comes, it isn’t just gentle rain, it comes in two or three hour downpours of three inches. When I visited Taiwan the first time, I noticed that they have tomato trellising that was three times as sturdy as I thought you would need, not just a tripod with three bamboo poles, it would be a tripod with eight or nine bamboo poles. And then I saw a typhoon, and I saw that their tomatoes were still standing, because they have learned how to make trellises that can stand up to a typhoon.”

“The kind of rain I saw while I was in South Korea and Taiwan explained why they use hoophouses in the summertime to protect their crops. Rain coming down so hard that it washes the crop out of the ground, or flattens it. Or if it’s seed, it could bury it or wash it out. They’ve been managing heavy downpours a long time.” Peacework has four hoophouses that have been used in the past for season extension and disease management, but recently there is talk about how to use them to protect crops from heavy rains.

There is also discussion about returning to some water and wind management practices that were used in the past. “We are lucky that we have sandy loam over gravel. We used to have it set up with grass strips between the beds, and that was a pain in the neck because you had to mow those strips. So we took most of them out, and I’m thinking that was a mistake. With the grass strip you can get on a bed way earlier, because the whole field doesn’t have to dry out. You can ride your tractor on the grass strip and do light tilling of a bed, where it would be too wet if there weren’t the grass strip there.” Because the Peacework property is level, water erosion is not a concern, but the soils, plants and people are exposed to wind. “In a very dry summer there can be a lot of real painful wind erosion, with the wind whipping through the sand. So I think being careful to have grass strips and windbreaks of bushes or trees is essential for a changing climate.”

Like other growers in the humid East, Elizabeth has seen a startling increase in crop disease with the changes in weather over the last decade. “In my first fifteen years of farming we never lost an entire crop to a disease. You would have some disease on some of the crop, or some pest, but in the past ten to fifteen years, we’ve had things like powdery mildew blow in and entirely wipe out all the cucumbers. Or late blight totally wipe out the tomatoes and potato crop. That was just not an experience that I’d had before.”

Elizabeth expressed concerns about the lack of federal crop insurance programs for diversified vegetable growers faced with managing the novel risks she has experienced from climate change effects on her farm. “The crop insurance that is available is not appropriate for our farm. It’s getting better. They have some new policies that are more accommodating to a farm growing seventy crops, but for the most part up until now they haven’t had that. You get the insurance, you pay by the crop. It hasn’t been a good fit. And it is very irritating to me, that despite the hazards for farmers, insurance companies consider crop insurance really a nice profit area, because they get subsidies from the government. They are subsidized by the federal government. Their guaranteed profit is higher than any farm ever gets.”

Looking to the future, Elizabeth believes we have the knowledge we need to sustainably manage soils and crops in a changing climate. She believes that efforts to improve the adaptive capacity of farms are best focused on the human dimensions of agriculture. “I think we’ve paid plenty of attention to soil and crops and not enough attention to people. The past ten years I’ve been working on the Agricultural Justice Project, which addresses issues of domestic fair trade. It’s developing standards for fair payments to farmers that fully cover production costs and fair labor standards on the farms, so the people who actually do the farm work are treated better, given more respect and are involved more in the farming. I think that’s what we need to understand better because in these very, very challenging times, having one manager is not enough. Everybody on a farm has to be constantly observing, trying to understand, and working out how to be nimble together.”

Elizabeth has been an active organizer, advocate and author for organic farming, sustainable agriculture and food justice for many years and represents NOFA on the Board of the Agricultural Justice Project, which offers Food Justice Certification. She has been nationally recognized for her work as a recipient of the Spirit of Organic award (2001), Cooperating for Communities award (2007), a NOFA-NY Lifetime Achievement Award (2009) and, most recently, the Ecological Farming Association’s Justie Award (2014). She co-authored the book Sharing the Harvest: A Citizen’s Guide to Community Supported Agriculture (Chelsea Green, 2007), which has helped many farms connect directly with supportive customers willing to share the risk with their farmers. Although Elizabeth retired from full-time farming in 2012, she remains active as a mentor, food justice activist and author.