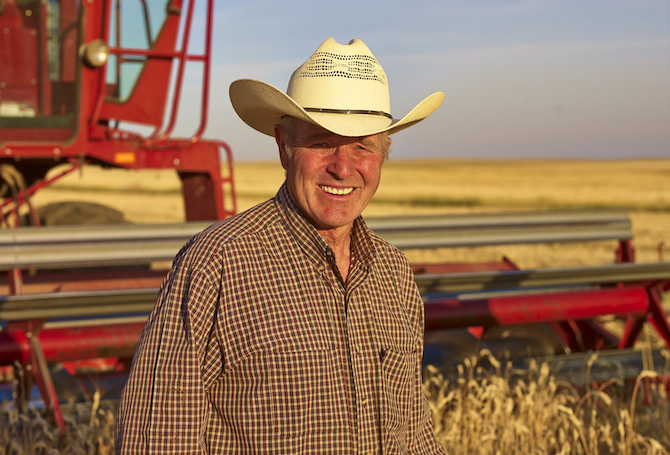 All the time I was growing up in the decades I can remember, we have a more or less an eleven year drought cycle. We would have a drought, one or two years in eleven. The drought that started in the late nineties, and went to ’05 or ’06 was not followed by a wet year until last year. That seven-year drought, that’s extremely unusual. And then last year was extremely wet. I mean like almost double our normal rainfall. And this winter has been quite cold again, more like what we used to have, thirty-five, forty below zero. We haven’t had a winter like this for twenty years probably. This is the kind of variability that I’m talking about.

We Don’t Want to Just Survive…

Bob Quinn – The Past, Present, and Future of Organic

Revitalizing Rural Communities One Grain At A Time

The Quinn Farm and Ranch is near the town of Big Sandy in the “Golden Triangle” of north-central Montana. The climate in this shortgrass prairie region is cold — temperatures can drop as low as forty below in winter — and dry, averaging between eight and twelve inches of rainfall, which falls mostly in May and June. Bob Quinn grew up working on his family’s 2,400-acre wheat and cattle ranch established by his grandfather in 1928. After going away to college, Bob returned home with a PhD in plant biochemistry to take over management of the farm and ranch in 1978. Disenchanted with unstable commodity prices, he established Montana Flour and Grains in 1983 and begin direct marketing his wheat to bakeries. Two years later Bob sold the cattle business so that he could focus on grain production and marketing, purchased a grain mill to add wholegrain flour to his product line and began marketing grain for his neighbors. Requests from buyers for organic grains got him interested in developing organic production methods for dryland grains and in 1987, Bob harvested his first crop of certified organic grains. Just two years later, the entire Quinn Farm and Ranch was certified organic.

An active researcher throughout his life, Bob has worked for many years to develop new organic farming methods and crops in collaboration with Montana State University and at his own research facility on the Quinn Farm. In the 1980s, he successful commercialized Khorasan wheat, a heirloom variety, under the Kamut trademark. Current research at the Quinn Research Farm is focused on ways to enhance the food and energy self-reliance of north-central Montana. Bob is developing a certified organic dryland cropping system that produces locally-adapted, vegetables and fruits as well as the fertilizer and fuel needed to produce and process the vegetables and fruits. Other investigations currently underway include community-based biofuel production, novel oilseeds for fuel and lubricants, improving grain crop rotations and weed management, and developing salt-tolerant vegetable cultivars.

Thinking about production challenges over the forty-plus years that he has been managing grain production at the Quinn Farm, Bob has seen some changes in weather over the last two decades. The growing season has lengthened, temperatures and precipitation are more variable, temperatures are warmer and dry periods and heat waves are more common. These changes have disrupted an eleven-year drought cycle that has long been typical for the region. Bob explains, “There are more dry periods and drought, more warm temperatures and more heat waves, and there’s less cold temperatures until this winter [2013–14]. In the last thirty-six years, we’ve had three pretty bad droughts and two pretty wet seasons, extremely wet. So we skipped one of our wet periods in the eleven-year drought cycle.”

These changes, particularly the longer periods of drought and more frequent heat waves, required Bob to replace alfalfa, the main cover crop in his rotation for many years, with more drought-resistant species. “We started out using only alfalfa as a soil-building crop, and it worked out just fantastic until we entered our first major drought,” Bob recalls. “We were affected by the drought a whole year earlier than all of our neighbors because alfalfa sucks so much water out of the ground. For one year, the drought actually wiped us out, so we gave up on alfalfa and went to peas as a green manure crop.” Peas seemed like a good choice because they will grow enough, even in a drought year, to cover the ground and protect the soil from wind erosion and loss of water through evaporation. But after the switch, weeds began to increase and grain protein content started to drop, says Bob. “So then we went to a combination of peas and alfalfa and then we also added clover and buckwheat. The clover is a two-year biannual crop, alfalfa’s a three-year crop, and peas are a one-year crop. We added buckwheat to the rotation as a plow-down green manure crop, so now we have as much diversity in cover crops as we do in our cash crops.” Bob also dropped one cash crop, lentils, from his crop rotation, because of its sensitivity to high temperatures and drought.

The performance of the new crop rotation over the last decade has reinforced Bob’s appreciation for the benefits of crop diversity. “I’m very, very solid and sold on the importance of diversity as the weather has become more erratic. Some crops will do better than others, depending on when the rains come, and when the heat comes, and when the cold comes. It is all becoming more erratic, so you never know which year it’s going to be. All those crops will react a little differently, some will do better, some will do worse, but if you have a big diversity, then you can save a lot of your income and your harvest overall.”

Although Bob is satisfied with the performance of the mix of his crop rotation, he continues working to fine-tune the order the crops appear in the rotation to enhance yields and soil quality. “We’ve designed the crop rotation to have all types of different crops feeding and taking from the soil over the course of nine years,” he explains. “Now we’re working more on the order, trying to work out which crop best follows another crop. We’re also starting to look at some companion cropping and the use of no-till on the farm. All of this ties into soil health. We believe if you have good soil health, then you’ll have good plant health, and if you have good plant health, you’re going to have good people health.”

Thinking about the future, Bob is concerned about how more variable precipitation might affect crop production on the farm. “I’m a little bit worried about the water,” he says. “The long-term climate models show us getting warmer and wetter, but I don’t see the wetter happening yet for our region. Water is always a challenge because we’re in a semi-arid region. That means we’re always short. Normally that’s the limiting factor in crop production here, so we’re always looking for ways to conserve water, to catch more water that falls in the land.”

Bob appreciates the increased infiltration and water holding capacity achieved with his soil-building program, but is actively looking for ways to capture and store more rainfall, particularly during summer thunderstorms. He is also looking for different ways to conserve water because he believes that conflicts over water supplies are likely to grow in coming years. “I think that water is going to be the next big battleground. It’ll make the fuel crisis look like Disneyland. If we can figure out how to grow at least some basic food crops, grains, vegetables and fruits, without a lot of water, that will be a huge benefit, because we may be forced into that at some point.”

Bob also sees many potential opportunities in changing climate conditions. The Quinn Farm moved from zone 3 to zone 4 in the new USDA growing zone map released in 2012, opening up some new fruit-growing possibilities. Bob explains, “I’m pretty interested in seeing what plants can survive on the prairie and what we can do with fruit juices and that sort of thing. We are more than a thousand miles from the nearest orange tree, so why are we drinking orange juice every morning? That’s what I ask my friends.”
Bob has been experimenting with a new fruit juice drink that makes use of sour cherries, a fruit that can be grown locally. Sour cherry juice has as the vitamin C and antioxidants of orange juice, but is too sour to drink alone. “A mix of sweet apple cider and sour cherry juice makes an amazingly robust and zesty breakfast drink,” says Bob. “People don’t think about growing cherries out on the prairie, but we get a huge production from our hardy sour cherry trees. Canadian researchers have shown that if you protect fruit trees with some kind of a shelterbelt, some kind of protection against direct winds, which are pretty fierce on the prairie, you can have success with them. That’s what we’ve done and we are showing that to be true.”

Years of active research and development work has left Bob a little frustrated at the slow erosion of support for government technical assistance programs like the Natural Resources Conservation Service and the Cooperative Extension Service. “My biggest complaint is that they do not have time to help with inventive projects. There are no provisions to help people that want to try something completely different or in a different way. They’re way overloaded with these programs that someone else has designed. They don’t have any time for ingenuity and something different, and I think that’s too bad. They didn’t use to be that way. They used to be a resource for any kind of soil conservation project that you might want to dream up.”

“I wish that we could send that message to Washington somehow,” Bob goes on, “that they don’t have all the answers, and by pretending that they do, they really stifle imagination and response to some of these future challenges. Especially now, when things are obviously changing, we need to really be thinking of as many different solutions as possible, not trying to apply a solution that worked in the last decade. Many of those old solutions were fine, but they might not work in the future nearly as well as something that some people are only just starting to think about now, or something that hasn’t even been thought of yet.”

Bob has long been recognized for his innovative leadership in sustainable agriculture and organic farming research and business development. He is a recipient of AERO’s Sustainable Agriculture Award (1988), was honored for a lifetime of service by the Montana Organic Association (2007) and received the National Organic Leadership Award from the Organic Trade Association in 2010. In 2011, Bob was named a Good Food Hero in recognition of his work with ancient grains, organic production and improving food quality and in 2013, the Rodale Research Institute recognized him with a national Organic Pioneer Award. Quinn Farm and Ranch is one of sixty American farms and ranches selected for the USDA-SARE publication “The New American Farmer: Profiles of Agricultural Innovation.”