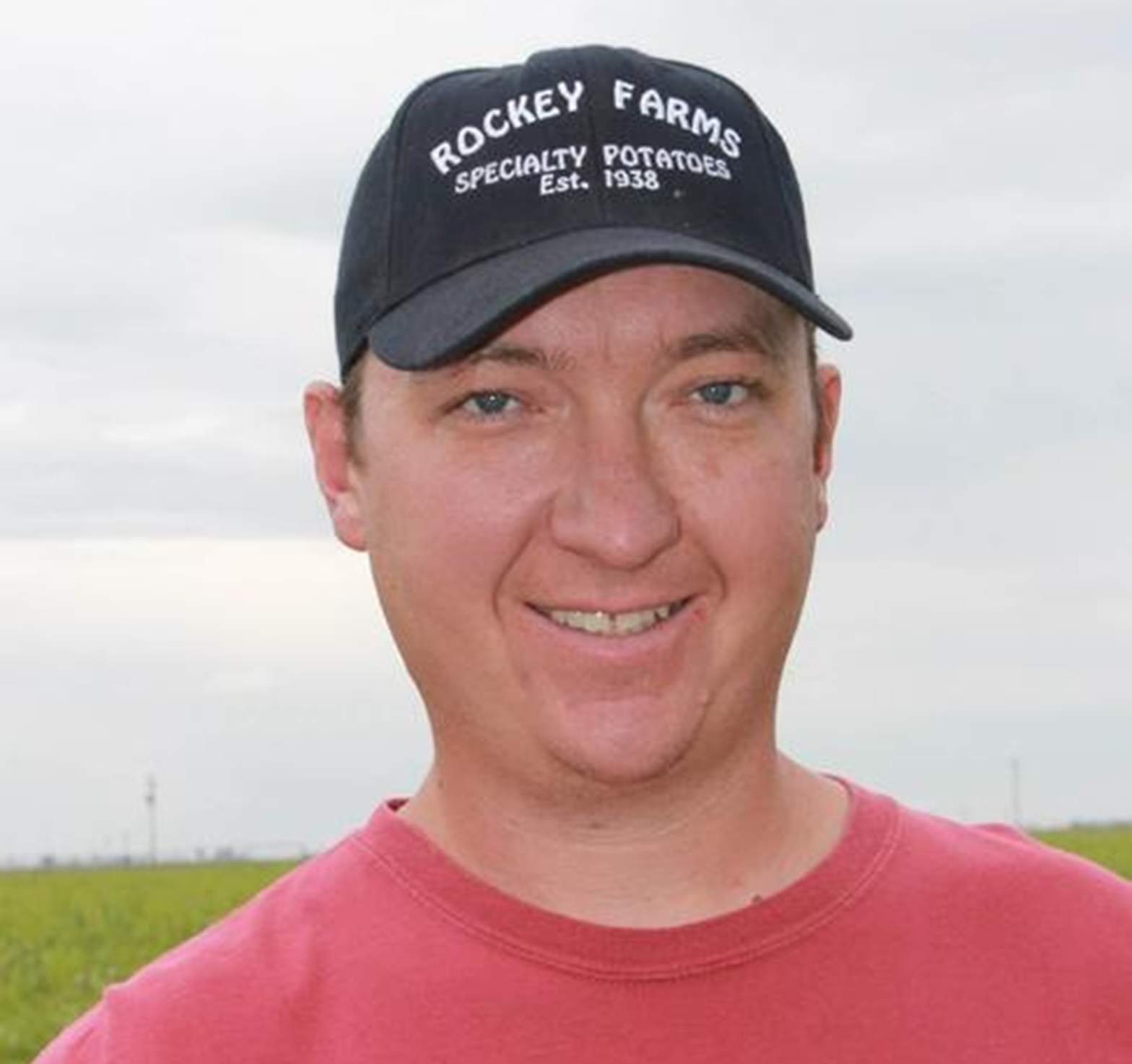 For every research paper you read on global warming, you find another one saying it is getting cooler. I think weather cycles, but I don’t get too hung up on patterns because it is beyond my control. My whole focus is just creating a resilient system that can handle climate change, whichever direction it might be.

Brendon and Sheldon Rockey are the third generation to grow potatoes on 500 acres of irrigated land in the San Luis Valley of Colorado. The Rockeys operate a farm and packinghouse near Center. Brendon is in charge of field operations while Sheldon is operations manager of the business which packs specialty potatoes for certified seed and fresh table use. The farm focuses on direct sales to commercial potato growers and the wholesale fresh table potato market. They also do some direct sales from the farm.

Brendon has successfully incorporated sustainable agriculture practices like cover cropping and companion planting into the production system to improve soil quality and conserve water. The increased soil quality that Brendon achieved with the new cropping practices improved farm profitability because he found that he could use less water and decrease or eliminate fertilizer and pesticide use while maintaining yields and improving crop quality.

Brendon Rockey says that concerns about water use on their farm pushed him and his brother into trying cover crops. Average rainfall in the valley is about five inches per year, so all agriculture there is irrigated. Growers pump from wells and that water is replaced each spring from the snowmelt, which flows down from the mountains to replenish the groundwater. During this drought, growers have been pumping more water from the aquifer than is being replaced by the snowmelt and in 2013 the aquifer level hit a record low. “Water has always been a huge issue for us out here in Southern Colorado. We’re in the middle of a drought like a lot of America, and it’s been going on now for fifteen plus years. It has really forced us to make some changes to our management practices, but it’s actually helped out our farm as a whole,” explains Brendon.

Longtime growers of certified seed potatoes as well as fresh market potatoes, the brothers decided to drop barley from their two-year potato/barley rotation about ten years ago and replace it with a mixed cover crop as a way to decrease water use. They reduced their water use by about fourteen inches, and the switch had some other significant and unexpected benefits. As Brendon explains, “Bringing in a diverse cover crop improved our soil health so much that it had a huge impact on the productivity of our potato crop.” The increase in soil quality reduced input costs and increased potato quality so dramatically that Brendon found it was more profitable to grow one cash crop every two years than one cash crop every year.

The cover crop success and the extreme drought in the Southwest has Brendon thinking about how to get even more out of his cover crops. As the drought continues unabated, Brendon is contemplating a polyculture designed to encourage beneficial insects and suppress pests in the potato crop. “We’ve seen so much positive impact from having the multi-species out in the cover crop that we are thinking about bringing more diversity into the potato crop. Next year I am planting a three-species companion crop and an eight-species insectary crop in the potatoes. I’m planting peas, chickling vetch and buckwheat in the rows with the potatoes. So I’ve got the two legumes out there for my nutrient management and the buckwheat attracting insects. I am also going to plant an occasional row of insectory mix in among the potatoes as well for the purpose of attracting predatory insects.” Brendon hopes to further reduce input costs and increase soil quality with the additional diversity added to his crop rotation.

Looking ahead, Brendon wonders about the future of agriculture in his valley. If the water supply becomes even more limited, growers will have no choice but to start taking acreage out of production. “I guess that’s the real scary thing. I’m hoping that we can get enough guys to do the right thing and save enough water that we don’t get to that point. It seems from the outside like it would be easy, but the attitude here is like, ‘I wish the neighbors would all cut back on the water so I can keep farming every acre I have.’ You just try and get a bunch of farmers together and get them to all agree on the same approach. It’s really difficult!”

Since 2013, the continuing drought in the southwest means that “water is still the number one stress factor for us in this valley,” according to Brendon. “It’s been business as usual since we talked last, no dramatic changes one way or the other in the weather.”  He has been pleased with

Long-term drought, plus low barley prices, have encouraged more potato farmers in the region to replace barley with cover crops, a shift that both conserves water and improves the production of the following potato crop. Brendon thinks these benefits have helped to make cover crops a more common practice in in the valley.  “I’ve heard a lot of people say that even if water was no longer a concern, they would continue to grow cover crops because of the benefits to the potato crop.”

Crop diversity has continued to be a focus of Brendon’s farm management. “I cringe when I see a monoculture,” Brendon says, “because I can’t imagine that crop functioning at its peak when it’s a single species by itself. It just doesn’t make sense to me.” He has increased his companion crop mix to five species and has also expanded his insectory strip mix to more than 20 species to cultivate the long bloom time and complex plant architecture needed to support high populations of beneficial insects throughout the growing season. He has also done some recent trials to explore the potential of adding quinoa to his cash crop mix.

Perhaps the biggest change at Rockey Farms since 2013 has been Brendon’s decision to integrate cattle and sheep into his crop rotation through contract grazing of cover crops. “It’s funny when you look back, because when my grandpa started farming here, every single farmer had livestock. I’m not sure at what point we drew the line in the sand and said, ‘you can only be a farmer or a rancher,’ but it’s nice to be bringing the two components back together again because both parties benefit from it.” Neighboring ranchers appreciate the opportunity to graze their stock on high quality cover crops close to home, and Brendon appreciates the additional income from pasture rent which pays about 75% of his cover crop seed costs, plus the added soil health benefits of managed, multi-species grazing.

Looking long-term at the future of agriculture in his region, Brendon recognizes that challenges of the continuing drought, but points to the growing population along Colorado’s Front Range as a bigger threat. Thinking about the most recent attempt to pipe water from his valley to supply homes 200 miles away in the Denver area, Brendon says, “I finally decided, you know what? Climate change is not going to be the thing that ends agriculture in this valley. I am much more worried about people than I am about weather changes. It’s going to be politics and other people that will put an end to it, long before climate change will.”

Brendon and Sheldon regularly host visitors and lead workshops at their farm and Brendon is a regular speaker at farming conferences and workshops throughout the U.S. The brothers were nationally recognized in 2012 for their innovative potato production system as recipients of the Soil and Water Conservation Society Merit Award for promoting sustainable agriculture and soil health.  In 2015, the National Potato Council recognized their leadership with the Environmental Stewardship Award.