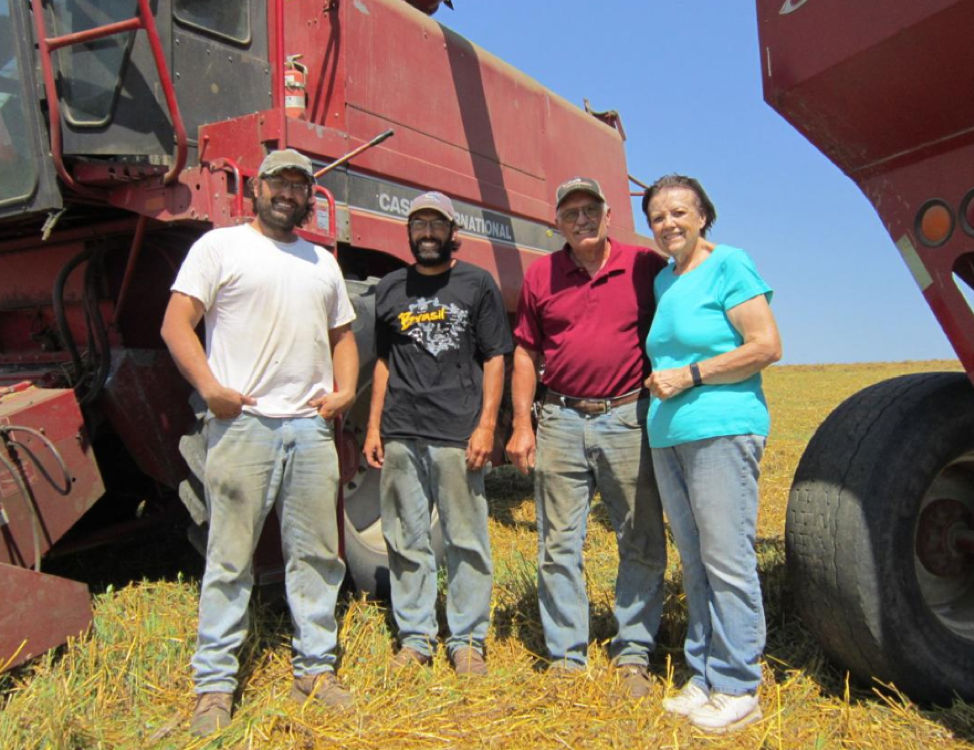 In the last three years we’ve had these huge amounts of rain in late May and June right when we’re supposed to be doing field work like weed control and planting cover crops into standing corn. We can’t get the job done. We can’t get decent weed control and so on because the window of opportunity for getting into the field is so small. So then labor becomes an issue and you have to put in incredible long days when the opportunity arises.

Rosmann Family Farms is comprised of 700 acres of rolling prairie lands near Harlan in west central Iowa. With help from their children, Ron and Maria Rosmann produce certified organic feed and food grains as well as beef, pork and poultry on land that has been in the family since 1939, when Ron’s father established the farm. After graduating from Iowa State University in 1973, Ron returned to manage the farm when his father retired. Ron farmed for commodity markets for about ten years, but became uncomfortable using chemical fertilizers and pesticides because of concerns about impacts to the environment and his family’s health. So Ron reverted to crop rotations that were common when his father started farming, and found that the farm could be profitable and productive. Ron went on to become an early adopter in his region of more sustainable production practices such as diversified crop rotations, intensive grazing and the Swedish deep bedding pork production system.

Today, the Rosmann Family Farm is a certified organic crop and livestock farm. The farm integrates beef cattle and swine into a diverse five-year crop rotation designed to produce the feed needed by the livestock operations, plus feed and food grains for sale. Corn, oats, soybeans, rye, barley, turnips, pasture and hay are grown on the farm. Intensive grazing practices produce grass-finished beef from a heard of eighty-five cows and calves, and a farrow-to-finish operation produces pork from thirty sows in a Swedish deep-bedding system. The organic waste produced by the farming operations, including the manure from the hogs, is composted and returned to cropland. Ron has not purchased nitrogen fertilizer since 1982, instead getting nitrogen for his crops through crop rotation and compost. Rock phosphate is applied about once every four or five years according to soil test recommendations. Beef, pork, feed and food grains are sold through wholesale and direct markets, including an on-farm retail store, managed by Maria, that is stocked with a variety of Rosmann Family Farm products as well as goods from neighboring farms.

Thinking about the effects of weather variability and extremes on farm performance over his lifetime, Ron says that there have definitely been some changes in recent years. More heavy rainfall and extreme weather, particularly extreme temperature swings in winter, more wind and a longer growing season, have created some new management challenges. “Anything involving variability in precipitation generally is a challenge,” according to Ron, “but the worst for us is excess moisture because it means you can’t get your work done, whether it’s baling hay, cultivating, planting, harvesting, planting cover crops, you name it. Of course, that’s an ongoing problem for organic farming anyway, but it’s just been exacerbated by the increased variability.”

Other changes in weather include more wind and more extreme storms. “We never used to have tornados,” Ron explains. “I saw my first tornado when I was forty-four years old, in ’94. I’ve seen two, three, four tornados since then. And hail. We never used to have hail very much, maybe once every seven years. Now we get it a little bit nearly every year. We’re in what’s come to be called a hail belt.” Another change is that temperature extremes have become more extreme. “If you come from the Midwest or have lived in the Midwest,” says Ron, “you know we have extremes, but the extremes have gotten worse. An example is last Monday [January 2014], it was 18 below zero temperature with a 25-mile-an-hour wind. We had a 40 below wind chill. Five days after that it got up to 48 degrees.” Looking back, Ron thinks the greater temperature extremes may have started in the early ’80s, when it was common to have weeks of 50-below wind chills and huge amounts of snow. Still, the worst snow that Ron has ever experienced was in the winter of 2010. “Our cattle were out in the fields. We couldn’t get out there and when we eventually did, we had no place to feed them,” Ron recalls. “It took some pretty big equipment to get through that kind of snow because it’s the wide-open prairies out here.”

Besides such physical challenges, Ron thinks the recent extreme swings in temperature are creating novel stress for his cattle. “What is the effect of temperature fluctuation and extreme weather changes on rates of gains?,” he asks. “ I think there may be more challenges for ruminants like our cattle with weather fluctuations. It used to be that the cattle could tank up on feed because you could count on the cold spell hanging around a couple weeks,” Ron explains. “Now we’ve got 50-, 60-degree swings in a matter of days, plus you throw the wind in. That’s the biggest change I’ve seen in my lifetime. Yes, we’ve always had those variations but not happening continually. You’d have longer periods in between. These extreme swings are hard.”

Longer growing seasons have increased weed management difficulties on the farm too, particularly with one weed species, giant ragweed. It has been a long-term challenge in the low-lying areas of the farm, but in the last five years or so it began moving up the hills on parts of the farm. Ron thinks wetter weather in May and June, combined with earlier spring warm-up and the longer growing season, work together to promote the spread of the weed. He explains, “We use a ridge-till system, which is a minimal tillage system. We don’t do any spring tillage until we are ready to plant. We historically are not even thinking about planting corn until May 1, but now the giant ragweed are already getting big by then. They are a tough weed to take out with cultivation.”

Ron says that many neighboring farmers are also increasingly challenged by changing weather conditions. Giant ragweed is even more troublesome on their farms and more narrow windows for fieldwork are creating other challenges. Many of his neighbors, most of whom are industrial corn and soybean farmers, have abandoned best management practices in an effort to get their fieldwork done at all. Ron explains, “Now every farmer in this region, just about, gets all their nitrogen fertilizer put on in the fall because they’re worried about it raining all spring. They have got to get the work done when they can because they are farming huge numbers of acres with huge equipment. But the data says between 40 and 60 percent of the nitrogen that they put on their ground is lost every year to the ground water.” Ron also says that many farmers in his region are upgrading and expanding tile drainage systems in an effort to move standing water off their fields after more frequent heavy rainfalls. This increased drainage capacity will likely wash even more nitrogen out of the farm system.

Ron is concerned about adaptations like these, which many industrial farmers are making to address current climate challenges. He fears many such farmers are focused on addressing the symptoms of climate change rather than looking for root causes such as federal support for large-scale industrial agriculture. “They keep working on genetically engineered crops and so forth, without ever looking at what caused the flooding or extreme drought in the first place. They just don’t consider the big-picture issues or how the system is creating these issues.” Ron goes on, “I found that out loud and clear this past fall [2013] when I was on a panel about the World Food Prize. There was a big biotech farmer on the panel who suggested to me that our farm system isn’t sustainable because it can’t be scaled up. I found out later that he and his brother were paid $2.3 million in farm subsidies over a thirteen-year period, which was the most of any farm in that county. And he has the audacity to say that his system is sustainable.”

Thinking about his farm as a whole, Ron says, “A testimony to the resilience of our farm system is the fact that we have never lost a crop to pests in thirty years now of no pesticides. We have never even come close to having insects or disease or anything destroy our yields. We’ve had stable, very good yields during all that time. That’s always something that people tend to look at you with, ‘Huh? I find that hard to believe.’ People don’t believe it. Of course, I’ll be the first to say we have a lot of things we could be doing better, but still, overall, the resilience shows itself in our system. Our soil quality shines here. It really does. And we work to enhance those ecosystem services, as they’re called, by continually planting more trees, more shrubs, more crops for pollinators, more windbreaks and more wildlife habitat. The diversity is what will continue to play a big role for us.”

In the future, Ron would like to move away from annual grain crops and incorporate more perennial nut, fruit and berry crops, both as food and as forages for livestock. He is inspired by Mark Shepard’s work adapting perennial cropping systems to Minnesota prairie landscapes. Ron explains, “That’s the kind of thing I would ideally like to do. But right now I’m going to put an emphasis on more water quality buffers, increasing the diversity of our headlands, getting more pollinator plants out there and planting more trees. Right now we have two and a half acres of managed woodlands, a diverse plantation that I planted with eleven different species on it.”

Over the years, Ron has engaged with diverse audiences on sustainable agriculture and rural community issues and the Rosmann family have welcomed numerous tours, visitors and research collaborators to the farm. Ron is a founding member of Practical Farmers of Iowa, a farmer-driven research and education organization, and has been active in the Organic Farming Research Foundation as a member, board member and president. In 2006, the Rosmann family received the Spencer Award for Sustainable Agriculture, which recognizes Iowa farmers who have made significant contributions toward the stability of Iowa farming. In 2012 the Catholic Rural Life Conference presented Ron and Maria with the Isidore and Maria Exemplary Award, which honors a rural couple who exemplify fidelity to a vision and vocation of rural life that combines family, stewardship and faith.