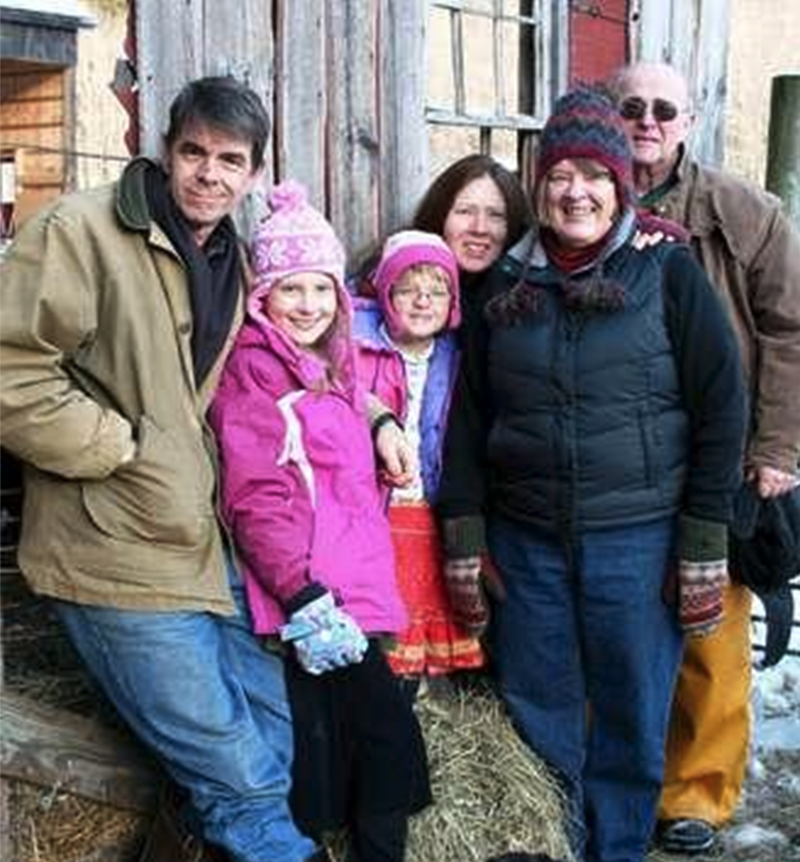 Variability in precipitation is always a challenge when you are producing livestock on pasture. It wasn’t too bad here until around 2000. But since then, particularly in the last couple of years, we’ve seen more variability with respect to some drier periods as well as excess moisture and flooding which is causing some problems.

In Upstate New York, One Local Restaurant Is a Family Affair

At Sap Bush Hollow Farm, three generations of the Hayes and Hooper family produce grass-fed lamb and beef, pastured pork and poultry, all-natural wool fiber, organic honey and all-natural handcrafts in the hills of Schoharie County, New York. All these products are sold through direct markets on the farm and at local farmers’ markets, and the non-perishable products are also marketed through the farm website and a regional foods website.

Jim and Adele Hayes established Sap Bush Hollow Farm in 1979 on 160 acres of upland pastures and wooded mountains near Warnerville, about an hour west of Albany, New York. With the goal of slowly building a pasture-based livestock business, they concentrated on sheep for the first decade, producing lambs for seasonal holiday markets. As they gained experience and marketing knowledge, they next expanded into pasture-based poultry, both layers and broilers, and finally added beef and pork, all in an intensive grazing management system.

Today, Jim and Adele manage a 200-ewe flock to produce their lambs and purchase all the other livestock they finish each year. The ruminants — beef and sheep — are 100-percent grass-fed and are rotated through a system of twenty paddocks on the farm, while the poultry and pigs spend their lives on pasture and are fed grain sourced from neighboring farms. The Hayes appreciate the multiple benefits of their diversified, pasture-based livestock production system to soil quality, pest management and marketing. They use no pesticides, other than worming medications when needed for the sheep, and there is virtually no soil erosion on the farm. They have not used any soil amendments, other than lime, for more than thirty years.

Over the last decade or so, more variable weather and extremes have created new challenges at Sap Bush Hollow Farm. Jim and Adele have adapted to more dry periods and drought by leasing some additional pastureland to increase their capacity for forage production and they have built ponds to provide water to every paddock on the farm. Stronger and more frequent winds are also challenging farm operations, even though the farm is in a sheltered location, and they have had to reinforce their portable poultry huts with steel bases to withstand higher winds.

In 2011, Sap Bush Hollow was right in the path of two back-to-back hurricanes — Irene and Lee — that caused catastrophic flooding in South Central New York. Jim says that the storms were an eye-opening experience for everyone in the community, particularly with respect to how quickly the road system in the area was destroyed. “The damage that those storms caused was very frightening,” Jim recalls. “That really reset our thinking in a lot of ways. Within a three-hour period the stream that runs along the state road below our house flooded and gouged out the entire road, the whole fifteen feet of macadam.” Jim and Adele had moved their flock of sheep to a neighboring farm that is at a higher elevation to protect them from the storm and were disturbed to learn that they could not get to them after the storm passed.

Although the sheep were less than a mile away, the flooding had destroyed the two bridges between their farm and the farm where they had sheltered their flock. “With the help of neighbors, we were able to repair the bridges enough so that we could walk over them. And so we were able to go up and drive the sheep home.”

Loss of power after the storm was also a worry. “We didn’t know how long we would be without power,” recalls Jim. “I thought we would be out for weeks at least and we have usually several tons of meat here in storage in our walk-in freezers. We have a generator that runs off our tractor but we only have storage for about three hundred gallons of diesel fuel on the farm.”

Another worry was feed. The hurricanes hit near the end of the poultry and pork production cycle, so the farm did not have a lot of feed on hand. “We were near the bottom of the line for feed,” Jim recalls, “and we had maybe a thousand chickens out here and hogs which needed grain. Fortunately, the power and roads in our area were repaired quite quickly. We were lucky in that respect.” Since these storms, Jim and Adele have put in a significant amount of solar power on the farm because of concerns about the reliability of the power grid. They are now looking into adding a reserve battery system to give them additional options for powering the walk-in freezer in the event of a major disruption of the electrical supply.

An indirect effect of the storms was a loss of farmers’ market sales, which are a large part of their business. “My daughter goes to a farmers’ market about twenty-five miles south of us, which is a little closer to New York City. That area has a lot of second homes. During Irene and Lee, they got hit pretty bad and got pretty much wiped out. That reduced our income by about thirty percent for quite a while. I would say that this year [2013] is probably the first year it’s been about fully recovered.”

Over the last fifteen years, heavy rainfalls have become more frequent and have increased in intensity at Sap Bush Hollow Farm. Jim and Adele have made a number of changes on the farm to try and manage the increased surface water flows during the heavy rains. “We were getting quite a bit of flow down the valley,” explains Jim, “and quite a bit of groundwater coming up and saturating the areas where we keep the livestock during the winter.” They built a new drainage system to redirect surface runoff and built a new barn with a raised concrete floor to provide dry shelter for livestock.

Jim and Adele have also noticed warmer temperatures, particularly in winter, and longer growing seasons, which create some new challenges and some new opportunities. “As far as normals go, we’ve been here a long time and the winters are not anywhere as near as severe as they used to be,” says Jim. The warmer and wetter conditions increased parasite pressures in the sheep flock. “About eight years ago or so, we started really having problems with heavy parasite loads,” explains Jim. “Because of the lack of effective deworming medications, we started using the FAMACHA System which is an eyelid test that allows you to estimate the level of infestation of Haemonchus, which is a major parasite of sheep. Overtime, the use of the system increases the flock’s natural resistance to parasites. It’s a whole new system and I think it does work.”

Jim also shifted to mob grazing, a special type of rotational grazing, to reduce parasite pressures. This involves managing pastures in more mature growth phases with high-intensity grazing over very short time periods. “Now we’re letting the grass grow longer,” Jim explains, “and we may only take 30 percent of the available forage from the top down. We have a higher residual level of thatch and the sheep aren’t grazing so close to the ground, so we’re having less parasite problems.” Jim has noticed some other benefits of mob grazing as well, including increased forage production, better production during dry periods, faster recovery after grazing, better weight gains and improved soil quality. “Many producers in the area are reluctant to use it because of the amount of forage that gets pounded into the dirt,” says Jim, “but I think the benefits are worth it.”

Jim and Adele have made some changes to capitalize on the longer growing season and to put their new barn to good use. They have shifted their lambing season from May to April. If April weather is cold and wet, they can lamb in the barn; if it is dry and warm, they can lamb in the open as they used to do in May. Earlier lambing gives the lambs more time to grow and mature during the best part of the grazing season. Jim explains, “We’re looking at a longer grazing season and we’re stockpiling more for winter grazing, two changes that are really going to help us because the difference between winter grazing versus purchasing hay is almost a factor of ten, as far as cost. We hope to get a higher percentage of our animals finished before the grazing season ends and it looks like we may be able to finish an additional batch of chickens each year as well.”

Jim says that most farmers in his area have noticed similar weather changes — more variability, warmer winters, more extreme events — and have adapted in different ways to them. Grain farmers are taking advantage of the lengthening growing season by shifting to longer-season corn varieties. Vegetable farmers are putting up more high tunnels to protect their crops from more variable weather and extend the growing season. Some sheep producers are switching from wool sheep to hair sheep, which have higher resistance to parasites, as a way to manage higher parasite pressures in the longer, warmer and wetter growing seasons. Hay producers have shifted to baleage or silage because more variable weather has made traditional hay making so difficult.

Jim and Adele’s experiences over the last decade have made them realize that they are quite vulnerable to heavy rainfall and more extreme weather events. “It’s come to be a major issue,” says Jim. They are actively working to identify and address major farm sensitivities to more variable weather and extremes and they appreciate the resources available to support their efforts over the last few years. “When we built the new barn we got some cost-sharing through NRCS on part of the flooring,” Jim explains. Federal cost-share money also helped with the project to divert surface water flows on the farm. The Hayes’ have considered federally-subsidized production insurance, but don’t think it would be beneficial because of their product diversity and the cost. Thinking about the future, Jim laughs and says that he isn’t very confident in their ability to manage changing climate conditions. “We’re doing this as best as we can,” he says, “but we realize that these things aren’t going to go away.”

Jim and Adele welcome their customers to the farm regularly and are active in civic and agricultural organizations in their region. Sap Bush Hollow Farm was profiled as one of sixty model U.S. sustainable farms and ranches in the USDA-SARE publication The New American Farmer: Profiles of Agricultural Innovation.