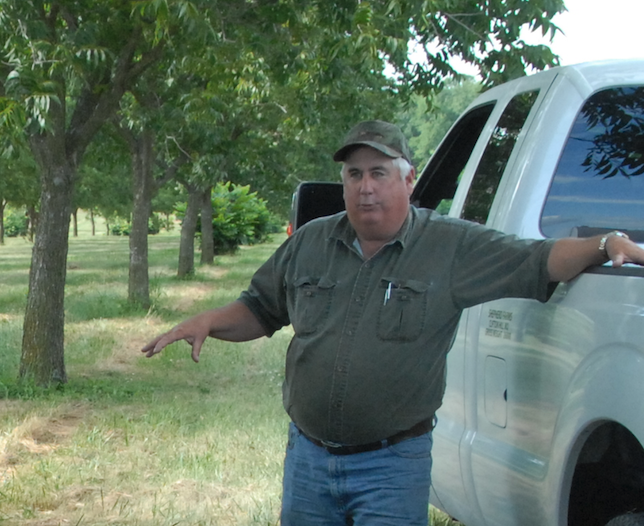 I’ve been out here for 40 some years, it’s really hard for me to notice any changes in weather patterns. As far the moisture, the drought and the frost and the freeze, we’ve always had those problems. I really can’t see a whole lot of change, even in 40 years.

Feedback from 40 years of pecan intercropping with Dan Shepherd

Dan Shepherd helped plant the first fifteen acres of pecan trees at Shepherd Farms near Clifton Hill, in north central Missouri, when he was fourteen years old. The pecan orchard was just the first of many alternative crops that Jerrell Shepherd, the farm’s founder and Dan’s father, put into place on the 1900-acre corn, soybean and wheat farm he purchased in the late 1960s in an effort to improve profitability through diversification into high-value specialty crops. Dan continued his father’s tradition of innovation when he took on full-time management of Shepherd Farms in 1985 by adding buffalo and gamma grass to the annual grains and pecans grown on the farm. Dan integrated all the crops and livestock through an innovative agroforestry system featuring alley cropping and management-intensive grazing.

Although the buffalo and gamma grass are now gone and most of the 4,000-acre farm is once again in an annual grain rotation, Dan still manages about 300 acres of mature pecan orchards. Pecans are processed on the farm, in a purpose-built facility that cracks, shells and packages them for direct market sales. Dan markets his pecans and other products through the Internet and an on-farm store open from October through December each year.

Like tree fruits, the production of tree nuts is complicated by variable weather during periods of temperature and moisture sensitivity in the annual life cycle of the plant. Over the years, Dan has learned how to produce a profitable crop of pecans despite the highly variable weather that is normal in his region. Pecans are sensitive to cold weather and frosts during the spring bloom, which typically occurs in late April. Drought in the summer and fall during the period of nut fill can cause small and misshapen nut meats. And although pecan trees are considered flood tolerant, flooding anytime except during winter, when they are dormant, can stress the trees and reduce nut yields.

Dan can’t say that he has perceived any change in the weather over the forty-plus years he has lived at Shepherd Farms. Through the years, the pecan bloom has been hit by frost pretty regularly, about once every four years. Sometimes this actually improves yields because a mild frost will reduce the nut load just enough to improve yield and quality. The diversity of pecan varieties also helps reduce the risk of spring freeze damage. In most years, at least some of the eight varieties grown in the orchard escape frost damage completely and rarely have any of them suffered a total loss due to spring freezes or frosts.

The Shepherd Farms’ orchards are not irrigated, so drought in the late summer and early fall has been a challenge at times; however, Dan says that summer temperatures or the frequency of heat waves or droughts have not changed noticeably at the farm over the last forty years. “Variability in precipitation affects the pecans more than anything else,” he explains; “I need a rain in August, and if I don’t get it, the pecans really suffer.” But pecan trees are tough once they’ve had some time to get established, especially to temperature extremes: “In the wintertime, I don’t care what the weather brings,” Dan says. “These pecan trees, the central and northern varieties that I grow, are pretty tough. The coldest day we’ve had so far this winter [2013] was 17 below, and I’m not worried about anything that’s three years or older. In summertime the heat just doesn’t affect them, it gets up to 100 or 103 degrees, it’s no big deal, they’re made to take that, temperature wise. Moisture wise, they can take a flood in the wintertime, it really doesn’t hurt them, but any other time, a flood does. And dry weather hurts them in the summer and fall.”

Pecans are native to the bottomlands of the Mississippi River basin and are well adapted to the wet conditions and recurring floods. The Shepherd orchard is planted in fertile floodplain soils along the east fork of the Chariton River. The river floods quite often, but the Shepherds built a levee in the 1970s that protects the orchard. “I’ve got a ten-mile levee on this farm,” Dan explains, “and that’s my life blood. My father put levees in, and we built them all ourselves, they’re private levees, and we treat them with great respect. We keep them mowed, it’s our main farm road, and we keep them up. That levee system is my whole life blood.”

“I do have a problem with flooding in my part of the country,” Dan goes on to say. “I’m in the river country up here in Missouri, and I’m on a river that does flood regularly. I’ve seen floods in every month of the year. Some of the worst floods we’ve had were in spring, when the ground’s still frozen. You get a bunch of snow on the ground, the frozen ground, and you get an inch of rain on top, you can have a pretty good flood. Even though we have a levee on the farm, and it’s probably one of the best levees in the country, it still can be topped like it was last year [2013].”

Shepherd Farms experienced unprecedented flooding and drought in 2013. “One of the worst floods we’ve ever had on the farm was in April 2013, and one of the worst droughts we’ve ever seen came that summer,” Dan says. “We got them both in the same year. Flooding really hurt the pecan trees in the spring, being underwater for a week or two, and that really set them back. Then turn right around and June 23 was the last rain we had until somewhere up in the middle of October, so that hurt the fill on the pecans.” Thinking back on that year, Dan says, “We got hit with water both ways in 2013. Too much water and not enough and at the wrong time of the year, that is tough.”

Although Dan has not noticed any clear trends in changing weather patterns, the last decade or so has included several unusually extreme weather events on the farm. He experienced total crop loss from a spring freeze for the first time in 2007, and the levee was breached for the first time since it was built in 1970 by a flood in July 2008, and then again in 2013. Dan can’t remember another time in the forty years he’s been on the farm when there were so many dry summers in a row, like those in 2011, ’12 and ’13. But Dan sees these events, though unusual, as just part of life in Missouri. “I think a lot of this is just typical of weather in my region,” he says. “We’ve got the Gulf of Mexico just south of us, it pumps a lot of moisture up. We have the big mountains in Colorado out there to stop those systems and dry them out before they come. We’ve got Canada up north that can drop a lot of cold air on us. Our weather is so variable that it’s hard to get a grasp on any changes that might be coming down the pike.”

Dan learned a lot from his father about using weather forecasts in farm planning and fieldwork scheduling. Dan explains, “My father was really an excellent weather forecaster. He was mainly in the radio business. He loved farming, but he also ran a bunch of radio stations. He had the first Doppler radar in Missouri in a radio station, right here in a little town nearby.”

Dan also has an interest in climatology and has read widely on the subject of climate history. “Do we have climate change? Sure we do!,” he says. “I can remember back in the mid ’70s to the early ’80s, we were going into a little ice age. Then we were supposed to be burning up and they’re going to call it global warming. And now they call it climate change. I’m enough of a climate history buff to know that we go through these cycles. We have twenty-year cycles, we have two-hundred-year cycles. When the Thames River froze up in the little ice age and when we had the terrible winters of the early 1900s. A lady here in Clifton Hill said that she remembered it snowing on June 6 in 1911, but that was in 1911, and we had global freezing then. Those are weather cycles.”

Dan Shepherd’s work developing gamma grass as a native forage crop and his innovative agroforestry system integrating grains, nuts, forages, buffalo and seed crops has been nationally recognized by the USDA’s Agriculture Research Service, the National Agroforestry Center and the Center for Agroforestry at the University of Missouri. Shepherd Farms is one of sixty farms and ranches selected for the USDA-SARE publication The New American Farmer: Profiles of Agricultural Innovation.