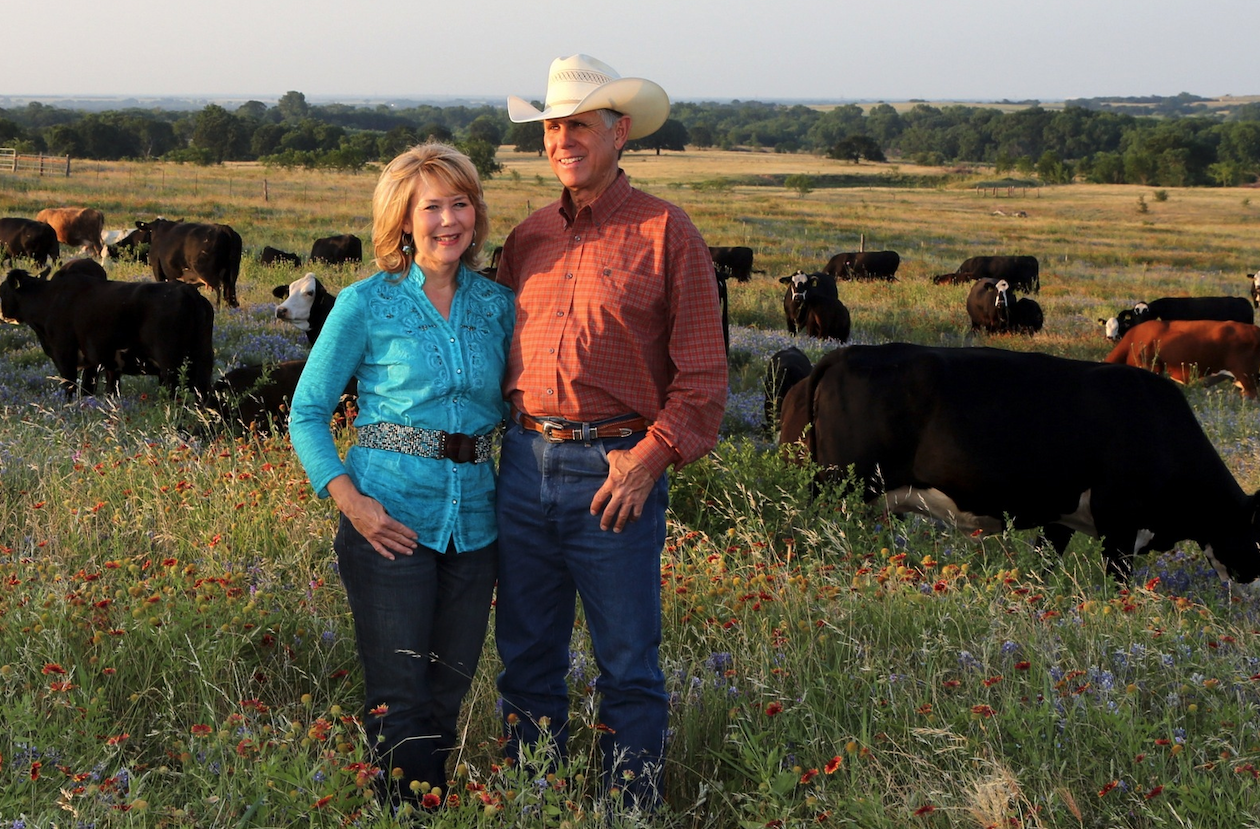 We should be very wet right now. We have cracks that you can put your hand in and that’s highly unusual for the middle of March. Our grass is not growing because it’s been too cold and it’s way too dry. We’ve gone now 90 days with a little less than one inch. In a time that is usually one of our wettest times. We are following 20 inches of rain which was unusual for the fall, so I mean right as we speak (March 2014) we’re seeing tremendous variability. You just don’t know what’s around the next corner, so you have to prepare for the worst. Hope for the best of course, but you know, hope’s not a plan.

Ranching with an Eye Towards Tomorrow

The 77 Ranch near Blooming Grove, Texas, sits at what could be considered ground zero for climate change impact in the continental United States. Historic drought in the southern Great Plains in 2011 and 2012 led to massive destocking of beef cattle on ranches throughout the region. Declining cattle herds drove the closures of cattle feeding and processing operations in the region and cost hundreds of jobs, while rising beef prices set new records. Yet through it all, Gary and Sue Price, owners and operators of the 77 Ranch, were able to maintain production of their 190-head cowherd without the need for supplemental feed or water. What sets the 77 Ranch apart from other ranches in the region? Why is it so resilient to drought?

The Prices began assembling their ranch almost forty years ago through the purchase of neighboring croplands and degraded rangelands. The productivity of a remnant native tallgrass prairie on the ranch in drought made a big impression on Gary. Using planned grazing, along with technical and financial support from numerous public and private organizations, Gary began to restore native prairies throughout the ranch, convinced that they could form the basis for a resilient, productive and profitable cattle production system. The historic drought of 2011 and 2012 seems to have proven him right.

Today, Gary uses planned grazing to manage a 190-cow beef herd on the restored native grasslands that dominate the 2,500-acre ranch, which also has 200 acres of cropland and about 90 acres of improved pastures. More than 40 acres of small stock ponds and small lakes provide water for livestock and waterfowl and generate extra income through the lease of fishing and hunting rights. The majority of the ranch’s income comes from marketing cattle produced on the ranch into value-added wholesale cattle markets through a source-verified program.

Gary has noticed a number of changes in the weather, which used to be pretty reliable, over the years he has been raising cattle at the 77 Ranch. “We had winters, very cold winters, and then we had a good spring flush that was very predictable,” he says. “We knew when our clovers were going to start growing, and we could almost predict to the day when we were going to have enough grass to stop feeding, usually about mid-March.” Gary remembers that July through early September was predictably hot and dry. “You knew you needed to get your business taken care of by middle of July,” he recalls. “We always used to say, you need to just hang on until the middle of September and then you were going to get fall rains again, and then you would be okay. That was fairly predictable. October was the transition month, November was nice and we would wean calves in October and November. We have our calving season fixed for that, but you just don’t know what to expect these days. It’s incredible, but you can throw all of that out now.”

Gary understands that memory can be faulty, particularly when comparing changes in weather through the years. “I know there’s probably some error, but with that said, I know that I’ve seen some things in the last five years or so that I’ve never seen before. I’ve never seen clover die in March or April for lack of water. It was much more usual to be challenged with mud in the spring and with figuring how are we going to get around and get cattle fed. That was fairly predictable.” Another big change he has noticed is the intensity of dry periods and drought. “The complete loss of precipitation for periods of time is very unusual,” he says. “We had a period in 2011 where we went three months with zero rain. I never saw that before. And that is not just my perception, those were records.”

Gary has made a number of changes at the 77 Ranch in response to the increased variability and extremes of the last five years. He has reduced the size of his cowherd to about eighty-five percent of the maximum he knows the land can support and he has leased additional rangeland as it becomes available near the ranch as some additional insurance against declining forage yields in times of drought. “In ranching, production challenges are always going to be related to your ability to produce forage,” says Gary. “You’re trying to grow as much grass as possible and do it as economically as possible. That is really the center of what we do. Producing high-quality forage takes healthy soil and then obviously it takes water as well. So the three main considerations would be the forages, the soil and the water.”

Gary is experimenting with grazing cover crop cocktails on his croplands for the first time. “We’re learning to manage for less water, we’re planning on less water and more heat, so we’re keeping as much cover as we possibly can on the land and then trying to balance that out with our stock numbers,” he explains. “These are great times in the cow business. We have the best markets ever. We want to try to take advantage of that, but not at the expense of our resource, because we’ll end up hitting a brick wall. It’s a short-term gain, and then you’re out of grass and that will not work in the long run. We want to do any and everything we can to protect the resource. We know that’s very, very important to not take these grasses down too far. We want to manage them so that they have the ability to respond to whatever rain we do get.”

Although the last few years have been extremely challenging, Gary sees some opportunity in the changing climate conditions. He admits he is an optimist and says that the increased variability has helped him become a better manager. “It’s given me a better understanding of the water cycle,” Gary explains, “and the importance of organic matter and soil health. These are things that we sometimes took for granted in the past and did not pay enough attention to. Once you go through a deal like 2011… we had thirty ponds that were completely dry. We had dead fish everywhere and gates thrown open, and some pretty big lakes that were dry. The extreme drought has made it clear how important soil health is to our overall operation. It has really motivated me to learn everything I can to make the place a sponge.”

Gary is pretty upbeat about the future, because the ranch has such a healthy natural resource base. He also appreciates the easy access to technical assistance and support to help him maintain the productivity and profitability of the ranch under changing conditions. “We feel pretty good. We think we are on the right track. We’re not wringing our hands over this. We’re thankful that we chose the right track many years ago. Everything in ranching is a moving target. It’s constantly changing, some things more than others. We must be very flexible in all that we do, and especially in our thinking, to adapt to changes. That’s just the way it is.”

Gary and Sue are both very active in civic, natural resource and agricultural organizations, regularly host visitors, field days and workshops at the ranch and collaborate in federal, state and nonprofit research projects. Gary and Sue were recognized by the Sand County Foundation with the Leopold Conservation Award in 2007. In 2012, they received the Outstanding Rangeland Stewardship Award from the Texas Section of the Society for Range Management and the Southwestern Cattle Raisers Association. The National Cattlemen’s Beef Association named Gary and Sue the national winners of the 2013 Environmental Stewardship Award.