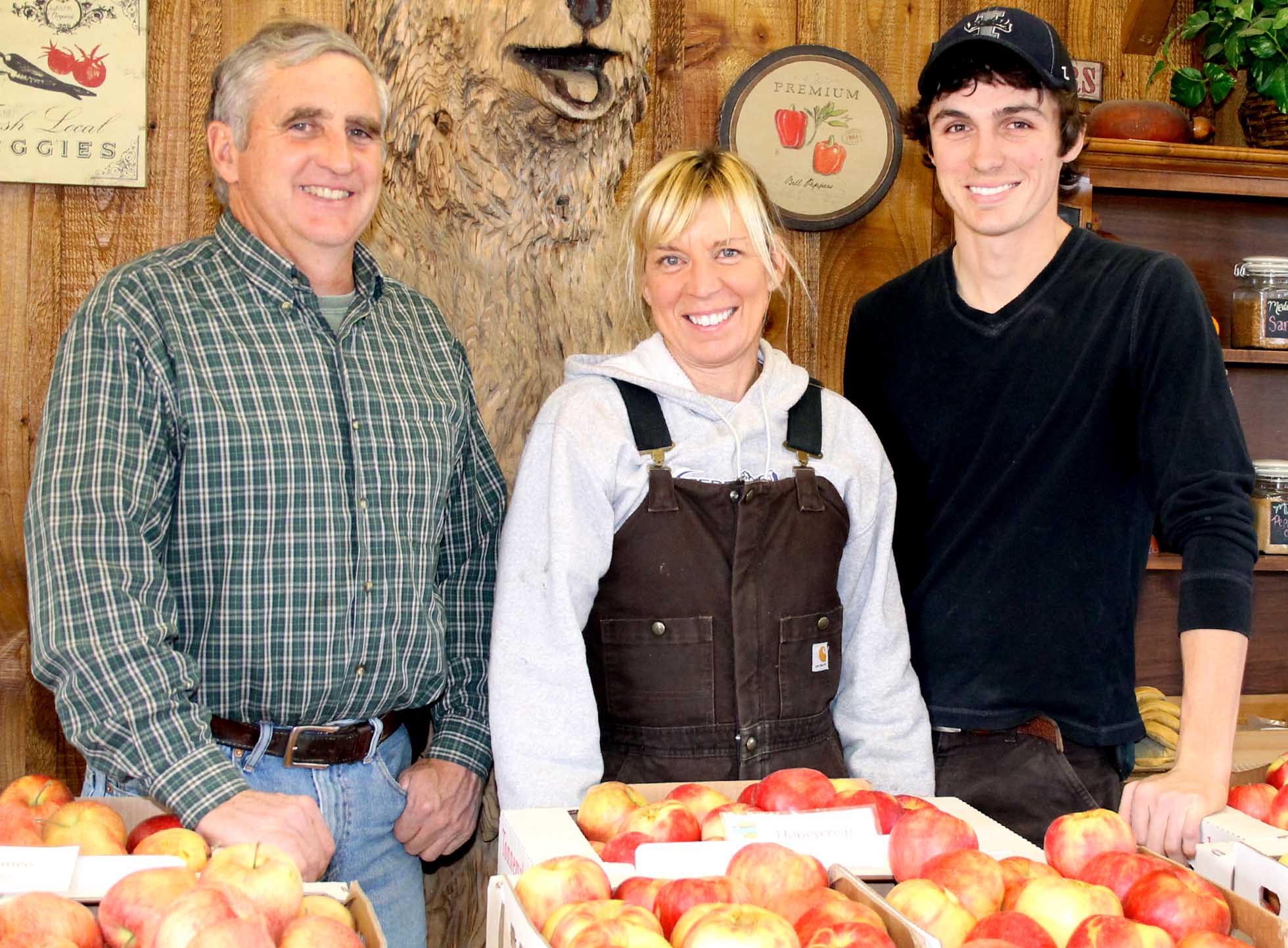 Sometimes the challenges of this year keep you from noticing the long term trend. I think that could be true in our case. I mean, truthfully, looking at the long range, I don’t know that we’ve really seen a big climate change effect here yet. It seems like our struggle is the variation from one year to the next. It just seems like that has overshadowed any long-term effect. Every year seems to be so different.

Apple, peaches hold up through heat, other fruits suffer

Tonnemaker Hill Farm is on the north slope of the Frenchman Hills near Royal City, Washington, a semi-arid region in the central part of the state. Brothers Kole and Kurt Tonnemaker are the third generation to own and operate the 126-acre farm, established in 1962 as one of the original farm units in the Columbia Basin Irrigation Project. The farm is home to 60 acres of orchard, 20 acres of vegetables and 40 acres of hay, all irrigated and certified organic.

Kole, his wife Sonia and their son Luke manage the production of more than four hundred varieties of apples, peaches, pears and other fruits and vegetables. Kurt manages direct sales to restaurants, a CSA and as many as fourteen weekly farmers’ markets in the Pullman–Moscow area, Seattle and along the I-5 corridor. Farm products are also marketed year-round at the Tonnemaker Farm’s popular retail store in Royal City. Besides fresh fruits and vegetables, the farm sells a variety of value-added products made from farm-grown produce including apple cider, fruit leathers, dried and frozen fruit and dried peppers.

When Kole took over the management of the farm in 1981, like many other farms in the region, Tonnemaker Hill specialized in apples, cherries and pears grown for wholesale commodity markets. Faced with falling wholesale prices as the fruit industry transitioned into corporate ownership during the 1980’s, Kole began to diversify into higher-value direct markets to maintain farm profitability.

In 1992, Kole’s brother Kurt took on marketing and sales for the farm full-time and began to expand direct market sales. He also encouraged Kole to consider using organic practices as a way to add value to Tonnemaker Hill products. Kole started the transition to certified organic production in 1997 and a decade later all of the cropland on the farm was USDA-certified organic.

Kole can’t say that he’s really noticed any change in weather variability over the thirty-plus years he has been managing the farm; however, he believes that the fall season has lengthened. “We figure on our farm, if we can get past the tenth of October without a killing frost, that’s a great year. It’s been about ten years since we had a killing frost in September.” Because winter kill and spring freezes and frosts are standard risks in tree fruit crops, Kole wonders if year-to-year variability has made it harder for him to see any clear trend over the years.

Another factor influencing his perception of weather patterns may be the farm’s north-facing aspect, which makes the production of stone fruits particularly challenging. “The cooler conditions on these slopes just increase the winter kill and spring frosts challenges,” he explains. “That’s been an ongoing issue for a long time. We grow stone fruits, which are more sensitive to variable weather in the winter and spring. They bloom earlier and they’re more susceptible to winter kill, so that’s always something that’s on our mind. Once the stone fruits — cherries, peaches and nectarines — have broken dormancy and started to lose their cold hardiness, they cannot reacquire it. They’re very vulnerable to temperature variability. If you get a warm week in January and they start to lose dormancy, and then all of a sudden you get a cold spell in February, damage to the fruit bud is a big concern. The apples and pears, which are pome fruits, are less sensitive because they can reacquire cold hardiness if temperatures fall again after a short warm period in winter or spring.”

Kole remembers his first decade or so as farm manager went pretty smoothly weather wise, although major crop losses in 1985 and then again in 1991 and 1992 from extreme weather got his attention. “We’re growing perennial crops that are susceptible to just being totally wiped out by freezing weather,” he explains. “In 1985, we had a terrible freeze in early November. I mean, it was 25 below zero in the first half of November. The trees were not ready for winter yet and it killed all the fruit buds. We had lost all our stone fruit crops for the 1986 season and we weren’t even in 1986 yet. And then, in both 1991 and ’92, we lost most of the fruit crops again.” Abnormally low temperatures in December 1990 caused massive winter kill that devastated the 1991 crop. One of the warmest winters and earliest blooms on record in 1991–92 set the orchard up for total crop loss from the most devastating spring frost ever experienced in the region. “We just thought, oh my goodness, we have got to have something to plant that’s not a perennial. We need something we can harvest when we don’t have the fruit crops. Also, we started getting insurance on the most risky of the crops after the 1992 frost.”

Because Kole had already begun to diversity markets and Kurt was able to take on direct marketing full-time, the decision to diversify into vegetable crops in the 1992 season was relatively easy. Looking back, Kole appreciates the complementary nature of the vegetable enterprise to overall farm performance. The short-season annual vegetable crops allow them to change planting date, crop mix and production volume in response to variations in the fruit harvest and seasonal weather conditions. “We’ve seen these extreme variations, and that was the killer for us. With fruit production, you need a constant. That’s why we went to vegetables. You have some room to modify the production of the annual crops to fit your needs and the season. For example, although we like to plant vegetables in the field starting the first of May, if it’s cold, we can just wait.”

Access to ample water supplies, industry changes in the 1980s and the back-to-back crop failures in 1991 and ‘92 that pushed Kole to diversify production and marketing all served to enhance the adaptive capacity of Tonnamaker Hill Farm. Although access to water has not been an issue in his region, Kole has some concerns about future water supplies. “Sixty years ago, this region was just desert. Nobody lived out here. Nobody. The land that our farm is on used to be a massive cattle ranch that went fifty miles one way and sixty miles another way. Now it’s a big fruit-growing area. We all get our water out of the Columbia River. Right now, we basically have all the water we need. But already in the Northwest now, there is a struggle to make sure there’s enough runoff for the salmon to migrate. One thing they talk about here is if we do get this global warming, it is possible that the Pacific Northwest will get drier. There’s been talk about that.”

In 2013, Kole and Sonia Tonnemaker were named Farmers of the Year by the Tilth Producers of Washington for their leadership and innovation in “ecologically sound, economically viable and socially equitable farming practices that improve the health of our communities and natural environment.”