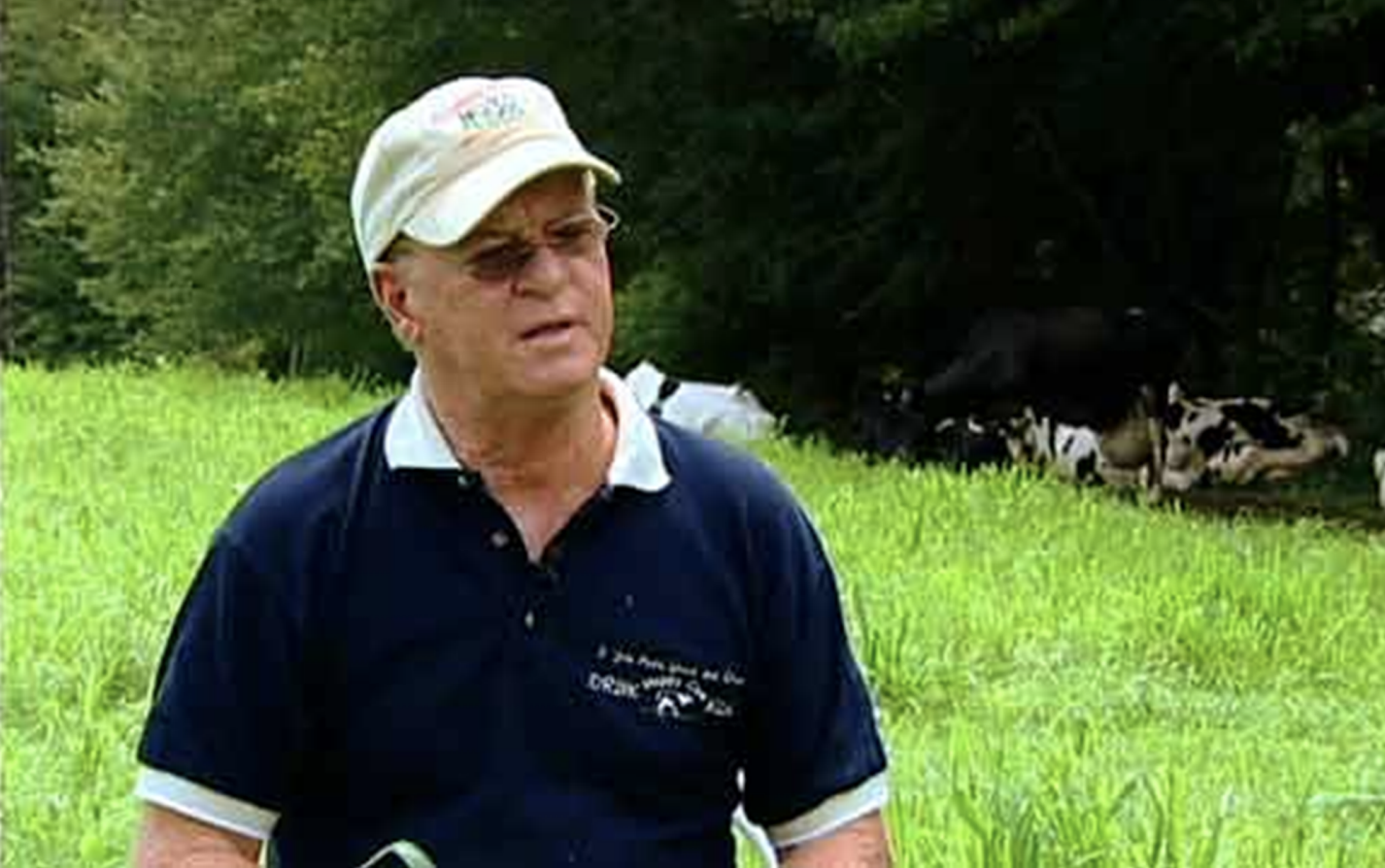 Really, we see some drought and hot temperatures every year.  This year (2013) is the first year that we haven’t really had a drought.   This year it has been really wet.  We had the rain, but we also didn’t have the sun, so we had two big problems.   I’m 72 years old and I’ve never seen as much rain in a year in my life, anywhere.  It really affected my crops.  Our hay was 9 percent protein. It would normally have been 18 or 20.  Like I say, never in my life have I endured that much rain.

Gov. presents Tom Trantham with Order of the Palmetto

What Can Farmers Do About Climate Change? Dynamic Cropping Systems: Tom Trantham’s Story

When Tom Trantham got into the dairy business in 1978, there were more than five hundred dairies in South Carolina; in Greenville County, where Tom’s farm is located in the upstate region near Pelzer, there were thirty. Today, there are just sixty dairies in all of South Carolina and Tom’s Happy Cow Creamery is the only one left in his county. What made Tom Trantham different? Why is he still producing milk on a small family dairy farm when so many others failed?

Like many American farmers feeling the pain of consolidation in the agricultural sector the 1980s, Tom was producing a lot of milk but barely turning a profit. “I went through some really rough times in those days, we all did,” he recalls. “I know there were more suicides and broken homes and divorces and bankruptcies in the ‘80s, because our parity was taken away from us in 1981. After that, corporate America priced our product and whatever they said it was worth is what we got paid. You never knew what you were going to be paid or how the price was set. You didn’t have any control of your product. So it went from a wonderful family life to an almost impossible life.”

Although Tom had long been among the top industrial milk producers in South Carolina, rising feed and farm chemical costs and falling prices left him with few options when he was refused an operating loan in 1987. Tom could see no way to continue in the dairy business. One sunny April morning that year, his cows broke through a fence to graze a mix of rye grass, clover and fescue that Tom had left standing because he couldn’t afford the seed and fertilizer to plant a corn crop. That evening’s milking yielded a two-pound increase of milk per cow and Tom thought, ‘Why not give my cows twelve Aprils a year?’ After some research into annual forage crops and intensive grazing practices, he successfully guided the transition of his ninety-cow dairy from a feed-based to a pasture-based production system, dramatically lowering his costs while increasing both herd health and milk quality.

The heart of Tom’s “Twelve Aprils” system is the successive planting of short-lived, seasonally adapted annual crops on about 60 acres to provide his cows with high-quality forage every month of the year. The forages he uses include grazing maize, sudangrass, millet, small grains, alfalfa and clover. Variables such as weather, forage needs and field-specific conditions mean that no two years are exactly alike, but on average Tom makes five to seven no-till plantings a year. Cows graze a planting once or twice and then the forage is cut for hay or bushhogged to prepare for the following crop. Tom’s Holsteins consistently top a 23000-pound herd average and many of them are still producing well at ten to fourteen years of age.

With the opening of the Happy Cow Creamery in 2002, Tom’s transformation from commodity dairyman to specialty milk retailer was complete. Tom built the creamery in a Harvestore silo he no longer needed for storing feed. The milk travels directly from the milking parlor to the processing plant, where it is low-temperature pasteurized and whole milk is bottled. Chocolate milk and buttermilk are also made and bottled on the farm. The milk is sold into direct wholesale markets in the upstate region of South Carolina and at an on-farm store that also retails a diverse line of mostly locally-sourced fresh and processed products including produce, fruits, butter, cheeses and meats.

In almost forty years of farming in upstate South Carolina, Tom can only remember one serious drought, in 1986, but he says that some drought and high temperatures are to be expected every year. The biggest change in weather that Tom has noticed is in the number and quality of summer thunderstorms. “When I started farming in ’78,” he says, “I remember night rains and thunderstorms in summer, and the lightning would just light up the whole sky, and we had rains, adequate rains. For the last ten or fifteen years, the thunderstorms don’t seem to be the same. They are more frequent, but yet we could still have a shortage of rain during July and August. I’ve also seen a difference in the storms. When we first moved here, we would be out on our porch looking at these thunderstorms, and they were very beautiful. It wasn’t like now, they’re so harsh. I’ve noticed a change in the harshness of the thunderstorms, I think. I can’t understand it or really put a word to it, but I know they are different.”

Tom appreciates the flexibility the Twelve Aprils system gives him to adjust to changing weather patterns through the year. “I prepare for what I think the situation’s going to be,” Tom says, “and then if it doesn’t work, I just bushhog it and plant something else. That’s the great thing about my system.” The ability to recover quickly from mistakes or the unexpected has been particularly helpful over the years. Using no-till also provides a lot of flexibility, plus it saves time and money in fuel and equipment costs. “There’s always a challenge in farming,” he says, “but if you make a mistake … or maybe it isn’t a mistake, maybe it rained too much or it was too dry, with my system you’re not set back too much. Just the number of days it takes for you to get back out there and replant. But when you’ve got a hundred acres of corn silage, and you lose it, you don’t have another shot until next year, so you’re done for. You’ve got to buy feed and all, and that’ll break you in a heartbeat, to have to purchase feed.”

Twenty-three years of diverse no-till cropping and management intensive grazing have produced very high-quality soils throughout the farm. “The organic matter in my soil is just unreal,” says Tom. “Now the way that I do that is by managing my forages so that I graze below the knee, mow below the waist (for hay) and bushhog above the waist [to control weeds and prepare the paddock for the next planting]. Now farmers think I am crazy. I just bushhogged all that feed. But this is what gives me high-quality forage and it does great things for my soil too. When a raindrop hits my ground, it’s just like a sponge. Hardpan is not a problem on my farm. When you walk on my fields, it’s like you’re walking on cushion.”

High soil quality and diverse cropping have also maintained soil fertility and reduced pests on the farm. With the exception one year when he applied fertilizer to plots being used by researchers on his farm, Tom has not used any chemicals or fertilizers in twenty-seven years. “The one thing that I really believe in, as much as anything I’m doing, is no use of chemicals or fertilizers,” Tom explains. “You can see many of my fields have less weeds than a field that’s been sprayed with every kind of thing you can think of. I really like to be able to do that.”

Tom is upbeat about his farm’s ability to remain productive if weather variability and extremes increase as projected for his region. He views the combination of high soil quality, no-till planting, diverse, short-season annuals and management intensive grazing as a very resilient production system. “I guess it depends on the degree of weather extremes that we are talking about,” says Tom, “but with my system, I am able to adjust. If one crop goes, another one’s put right in. I can respond rapidly to a situation that maybe others couldn’t.”

But Tom remains concerned about the continued growth of industrial dairy production and the continuing decline of family dairy farms in the United States. He heard recently about a dairy farm in Indiana that is milking thirty thousand cows. “How about having thirty thousand cows in South Carolina, but in three hundred, one-hundred-cow dairies?,” he asks. “Every community would benefit. I spend a lot of money in my community here. Everybody that touches an agricultural product after it leaves the farmer’s hands makes money, everybody, and a lot of it.”

Tom thinks back to the days when he was selling his milk to Dean Foods. “In the 1980s, the CEO of Dean Foods made a hundred-and-fifty-something million dollars in eight or ten years and then retired. That was my milk money. That’s why I was bankrupt. When there is that kind of money on the top end of the product and the guy that produced it couldn’t even get enough to pay his bills, that’s where this country has really messed up. It’s going in the wrong direction as far as agriculture. We’ve lost 90 percent of our dairy farms in this country since 1970. That’s just not how it ought to be.”

Today, the few remaining small-scale family dairy farms continue to struggle with rising costs of production and low milk prices. Tom understands how hard it can be to think about making radical changes when under the stress of managing an industrial dairy farm.  “I know if somebody would have walked down my driveway,” Tom explains, “and said, ‘Hey, Tom, I want to talk to you about this Twelve Aprils dairy system,’ I would have probably told them to leave. Dairy farmers just like me won’t accept that because they can’t take the chance. They are thinking, ‘What if it doesn’t work? I’ve got this big loan to pay and this feed bill to pay, and what if it doesn’t work?’ The thing about it is, it works so quick. It works so quick! It’s almost an instant thing. There are so many things that are so different here that it’s hard to see that it is actually easier than what they are doing now. They look at it as harder, which it just isn’t. It’s smooth as silk. The Good Lord woke me up back in 1987 and said, ‘Tom, you’ve had enough. Now follow your cows. They’ll show you how to be a dairy farmer.’”

Over the years, Tom has shared his experiences with countless dairy producers, researchers and policy makers throughout the country and abroad and he has provided leadership to many agriculture organizations over the years. In 2002, Tom’s innovative production system was recognized nationally when he was honored by the USDA’s Sustainable Agriculture, Research and Education Program with the Patrick Madden Award for Sustainable Agriculture from the . Tom received the 2014 Career Achievement Award from the Carolina Farm Stewardship Association.