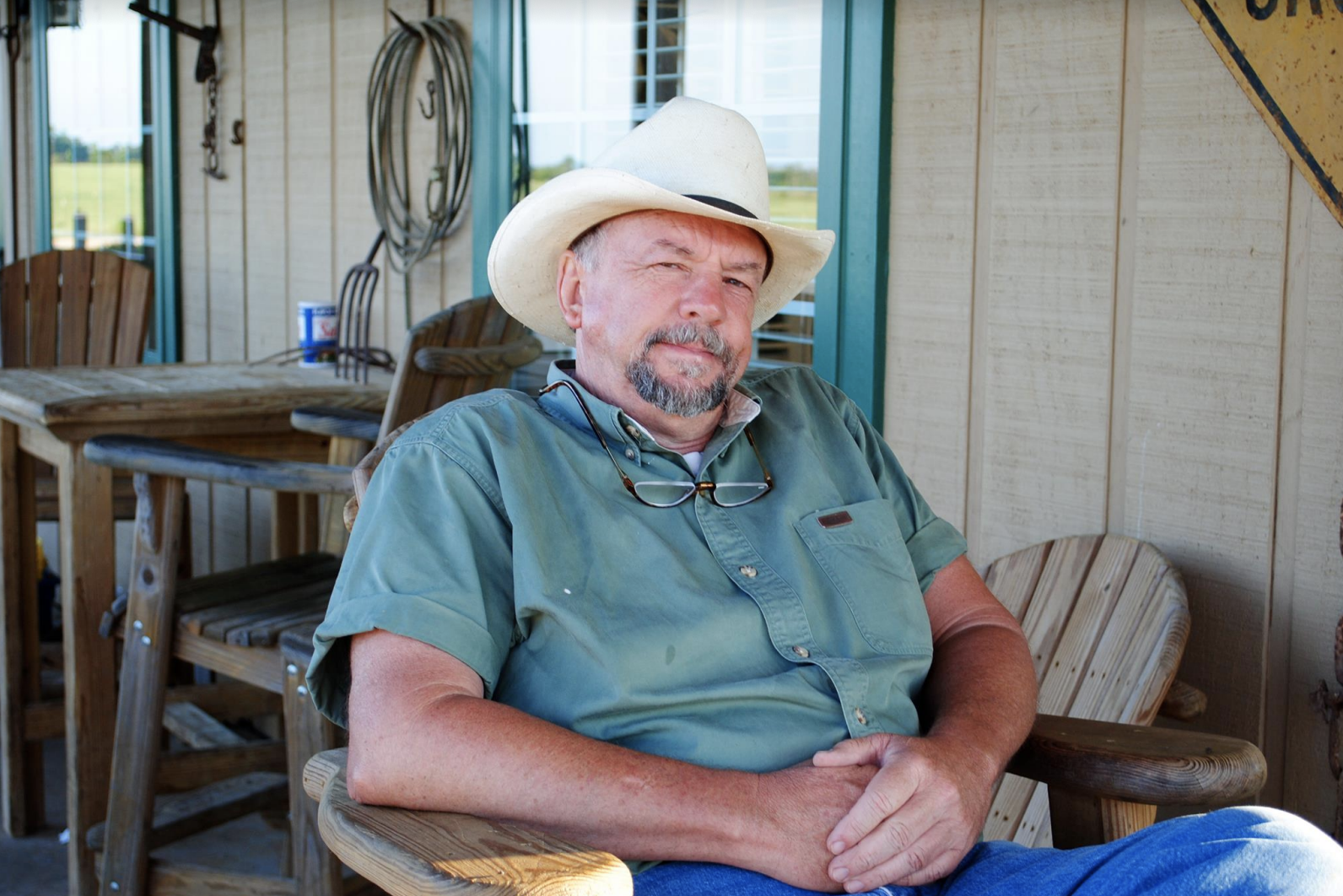 Certainly drought is the most difficult for us to deal with.  My father was still talking about the drought of 1954 when he died in 2000. Drought is not new here, but I do think that the variability of precipitation and temperature is increasing. I don’t have a lot of irrigation, and I’m sorry I don’t. We just don’t and probably won’t have it, because we don’t have a lot of ground water here.

Will Harris owns and operates White Oak Pastures located about ninety miles from the Gulf of Mexico in southwest Georgia near Bluffton.  Established by Will’s great-grandfather in 1866, Will is the fourth generation to own and manage the farm.  After World War II, Will’s father, ran the farm using the industrial model. Will helped his father with the farm when he was growing up and then came back to the farm to take on full-time management after graduating from college in 1976.  For the next fifteen years, Will continued raising calves and operating a feedlot using industrial practices, but declining profitability through the 1980s caused him to begin exploring higher-value alternative markets. In the mid-1990s he began to transition the farm from industrial to grass-finished beef production using management intensive grazing practices.

Today, White Oak Pastures produces a diversity of livestock and other products on about 2,500 acres. All the livestock produced at White Oak Pastures are pasture-raised and processed on farm in state-of-the-art USDA-inspected beef and poultry processing plants. The plants were designed by Dr. Temple Grandin, the animal scientist renowned for her pioneering work in the humane handling of livestock.  The whole farm is designed as a zero-waste system and the inedible materials and wastewater from the processing plants is recycled back to the farmland through composting and irrigation systems. The farm is powered by a large solar array that provides about 30 percent of power needs.

With the help of his daughters Jenni and Jodi, and Jodi’s husband John, Will manages the one hundred and twenty employees needed to make this diverse farming system work. Together they use multispecies rotational grazing practices to manage the production of red meats from a 700-cow beef herd, 1100 nanny goats, a 1000-ewe flock, 150 doe rabbits, and 30 sows, and poultry meats from the 320,000 chickens, turkeys, geese, ducks and guinea hens raised on the farm each year. The farm also produces organic vegetables on five acres, offers education tours of the farm, and recently added on-farm dining and lodging facilities.

White Oak Pastures sells its products through wholesale and direct markets. The farm has a CSA and an on-farm store and restaurant and distributes fresh meats to grocery stores and specialty markets throughout the Southeast. All of White Oak Pasture’s employees make above the minimum wage, have health insurance and get a yearly bonus.

Drought and heat have long played an important role in shaping the potential productivity at White Oak Pastures.  Will thinks that temperature and precipitation have grown more variable during his lifetime at the farm, but not to such an extent that he has had to adjust any production. Part of this may be due to his long experience raising livestock and to the flexibility of raising livestock on pasture. “If I do say so myself, we’re pretty good cattle people,” says Will. “We’ve been doing it for a long, long time on the same farm. We haven’t made a lot of terrible mistakes in recent years, because we learned how to do it. Our success is mostly at the mercies of the market and the weather and this gets into some of the changes we’ve made.” Will goes on to explain that improved soil quality on the farm has increased forage production and lowered production costs. “When I started changing the way I farm,” he says, “the organic matter in my soil was less than one-half of one percent. Today it’s over five percent. We’re able to grow our own forage and that takes a lot of the cost out of this compared to buying and bringing forage in.”

Will uses a no-till over-seeding system to produce high-quality forages for his livestock throughout the year on non-irrigated, warm season perennial pastures. For winter grazing, Will overseeds the pastures with annual cool-season forages such as cereal rye, ryegrass and clover. “I either mow or graze very short ahead of the seeding and then broadcast annual forage seed over the pasture with a truck,” he explains. “After the pasture is seeded, I come behind with a harrow that I’ve modified so I do not disturb the soil too much and then an aggressive drag behind the harrow to put the seed in good contact with the soil surface. Then I put the animals through the pasture to walk the seed into the ground. We don’t disturb the turf much this way and I always get a stand. I probably put a little too much seed in there, but I get a stand.”

The ability to control processing on-farm and sell into high-value markets has also made the farming system more stable despite increased weather variability and extremes. “We’ve gone from selling live cattle to pasture-raising and on-farm processing five red meat species and five poultry species as well as organic vegetables and eggs. What we think is probably the coolest part of our story is the way the farm has come full circle in the century and a half we’ve had it. What we do today is so remarkably similar to what my great-grandfather and grandfather did, except we’ve got refrigeration, internal combustion engines and regulations. It’s very similar to what they did, much more similar than what my father did and I did when I was a young man.”

Will says that other farmers in his region have also noticed more variable precipitation and higher temperatures and most have adapted by increasing their use of irrigation. “There is far more irrigation in my area than there ever used to be. Way more. The only reason I don’t have it is because I’m not on a good aquifer.” Will goes on to share his concern about the waste of water he has seen in his region. “Forever I’ve heard about water wars in the West.  I don’t know too much about them. In the East, there’s always been plenty of water for everybody, and water here is free. There’s some very token permitting that’s required, but there is not much to it. Once you get that, you can dig as big a hole as you want and pump as much water out as you want, and the only costs to you are the energy costs to doing the pumping and also digging the well. As a result, we grossly waste water.”

Will has seen farmers in his area irrigate in order to moisten the soil to prepare for planting, then irrigate again to water in fertilizers and pesticides, and then water a third time after seeding the crop. “That happens a lot,” says Will, “not occasionally … a lot. We’re now starting to feel a little bit of competition for water with environmentalists and urban communities. I think that if things continue, and they usually do, there’ll be some sort of regulation put on water use in agriculture and that will dramatically affect what we can grow. My system of farming struggles to compete with irrigated cotton and peanut farms, because they are growing subsidized crops and they gross a lot of money per acre compared to my grazing operation. It is very difficult to pay one hundred, two hundred, three hundred dollars an acre annual rent with a grazing operation, but if water becomes scarce, land rents will come down and we could afford to expand what we do.”

As weather variability and extremes have increased, Will says that he has put more time and effort into looking for new opportunities that might come with the changes.  “I’ve read a little bit about climate change,” Will explains. “I don’t know much about it, but it seems that for me, the bad part is more extremes in terms of temperature and rainfall, but the good news is it’s generally warmer and wetter, and warmer and wetter grows stuff. If it’s going to be warmer and wetter, that will benefit some of our species more than others. I have goats, sheep and cattle, and I don’t know that I know what works best, but I’m going to be sensitive to it, to see what does the best. I do know that geese, guineas and ducks handle heat and cold better than the chickens. If the weather becomes warmer and there is more moisture on an annual basis, but it is more erratic, I might change the species that I grow in the pastures, both the crops as well as the livestock. I’m at least taking some notes. I’m still growing more what the market wants than what is adapting well, but I’m sensitive to that. I’ll get the boot on climate change. It’s either happening or it’s not, but I will be watching closely to see if there are advantages we can take of it.”

Will says that if the changes in weather variability increase in coming years, he will have to make some changes, particularly if dry periods and droughts intensify. “Sooner or later, I’ll have to find some way to irrigate,” he says. Will thinks that soil quality will continue to increase on the farm and that will help to buffer more variable rainfall. “The 5 percent organic matter of the soil will keep building,” Will explains.  “It already helps make the land somewhat drought tolerant, not drought proof, but drought tolerant. If the variability stays about like this, we’ll be okay. If it gets a little worse, we’ll have to irrigate. If it’s a lot worse, even irrigation won’t help.”

Will Harris is active in community and agricultural organizations and has been widely recognized for his innovative production system and marketing practices. He was named the Georgia Small Businessman of the Year in 2011 by the U.S. Small Business Administration.  The Georgia Conservancy named him 2012 Conservationist of the Year. Will was named the Georgia Farmer of the Year in 2012 and in 2014, Will was nationally recognized by the Natural Resources Defense Council as a recipient of the Sustainable Livestock Producer Growing Green Award.